In ten posts, I am recommending good Swedish reads to enjoy during the dark days and pandemic lock down. This is the tenth, and final, one, and it’s a classic – ‘Doctor Glas’- written in 1905 by Hjalmar Söderberg.

The gripping tale of a young doctor who falls in love with a married woman. The woman is wedded to a sadistic minister and divorce is out of the question. To free the woman he loves, and enact revenge on her husband, Dr Glas is faced with a terrible dilemma. Söderberg is considered an important figure in Swedish literary history, and wrote several novels. Another of his famous works is ‘The Serious Game’.

In ten posts, I am recommending good Swedish reads to enjoy during the dark days and pandemic lock down. This is the ninth one – ‘Easy Money’ – written in 2006 by Jens Lapidus.

This book takes us into the brutal, criminal underworld of Stockholm. A thriller, the story follows the destinies of a group of young men all trying to get filthy rich, but paying a heavy price along the way. Jens Lapidus has written several books on the same theme and several have been made into movies.

In ten posts, I am recommending great Swedish reads to enjoy during the dark days. This is the eighth one – ‘The People of Hemsö’ – written in 1887 by legendary Swedish author August Strindberg.

Carlsson is on his way to the island of Hemsö in the Stockholm archipelago to work at widow Flod’s farm. With Flod’s husband dead, the farm is falling part. Drama ensues. A classic tale of greed, jealousy, love, lust and lies.

Over 10 posts, I will give you a recommendation of a Swedish book, translated into English, that is well worth a read. The sixth recommendation is ’Popular Music from Vittula’ from 2000, written by Mikael Niemi.

This brilliant book is set in the very north of Sweden during the 60’s and 70’s and is a young boy’s coming of age story. Based on the author’s own childhood, we get to experience a distant time in a remote region of Sweden influenced by communism, alcoholism, machoism, and rock and roll.

Over 10 posts, I will give you a recommendation of a Swedish book, translated into English, that is well worth a read. The sixth recommendation is ’The Hundred Year Old Man Who Climbed Out of the Window and Disappeared’ from 2009, written by Jonas Jonasson.

The book follows Allan Karlsson who escapes his old people’s home on his 100th birthday, and embarks on a remarkable journey through Sweden, with the police and bad guys hot in his heels. It is a funny book full of historical reference. It was made into a film in 2013. Jonas Jonasson also wrote ‘The Girl who Saved the King of Sweden’ which is also well worth a read.

As the autumn darkness envelops us, what better than snuggling under a blanket with a good book? Over 10 posts, I will give you a recommendation of a Swedish book, translated into English, that is well worth a read. The fifth recommendation is ’Hanna’s Daughters’ from 1994, written by Marianne Fredriksson.

Set against the majestic isolation of Scandinavian lakes and mountains, this is a story of three generations of women from the same family. It is a moving testament of a time forgotten and an epic romance in every sense of the word. It also reflects Swedish society and a journey from poverty to prosperity.

As the autumn darkness envelops us, what better than snuggling under a blanket with a good book? Over 10 posts, I will give you a recommendation of a Swedish book, translated into English, that is well worth a read. The fourth recommendation is ’The Girl with the Dragon Tattoo’ from 2005.

The first book in the Millenium series by Stieg Larsson is called ‘Men who hate women’ in Swedish. It is a psychological thriller that follows journalist Mikael Blomqvist and brilliant but deeply troubled hacker Lisbeth Salander. A real turn-pager, the book was an enormous success when it was posthumously published. It has been turned into a Swedish film featuring Noomi Rapace, and a Hollywood film, starring amongst others Daniel Craig.

As the autumn darkness envelops us, what better than snuggling under a blanket with a good book? Over 10 posts, I will give you a recommendation of a Swedish book, translated into English, that is well worth a read. The second recommendation is A man called Ove, written in 2012 by Fredrik Backman.

Ove is a grumpy yet loveable man who lives in a small Swedish town. One day, he finds his solitary world turned on its head when a boisterous young family moves in next door. As the novel unfolds, we see the reason behind Ove’s irritable, cranky surface and discover a story of love, grief and unexpected friendship.

The book was made into a hit film in 2015 and was nominated for two Oscars.

Autumn has us firmly in its clutches. Today, the clocks go back and darkness envelops us. what better then, than snuggling under a blanket with a good book? Sweden’s literary scene is highly productive, from non-fiction to novels, detective stories to literary masterpieces. For the coming ten blogs, I will give you one recommendation of a Swedish book, translated into English, that is well worth a read. Out first – in honour of approaching Halloween – is Let the Right One In by John Ajvide Lindqvist 2004.

In the dark winter of 1981 in the grey Stockholm suburb of Blackeberg, twelve year-old Oskar is being bullied. He develops a friendship with a young neighbour, Eli, who helps him fight back against his tormentors. But all is not what it seems because Eli is a vampire. As mysterious murders spread fear and confusion in the community, Oskar starts to suspect his neighbour’s dark secret.

The book was made into a film in 2008, which is also well worth a watch. 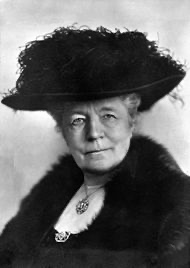 If Selma Ottilia Lovisa Lagerlöf was alive today, she would be celebrating her 161st birthday.

Born 20 November 1858, Selma Lagerlöf was a Swedish author, publishing her first novel, ‘Gösta Berling’s Saga’, at the age of 33. She is considered to be one of Sweden’s most significant writers throughout history.

She was a woman of firsts. She was the first female writer to win the Nobel Prize in Literature, which she was awarded in 1909.

Additionally, she was the first female to be granted a membership in The Swedish Academy in 1914 – the famous literary committee that selects the Nobel prize laureate amongst other things.

She wrote prolifically – mostly novels, religious texts and short stories. Other than ‘Gösta Björlings Saga’, her most famous works are probably ‘Jerusalem’, ‘The Treasure’ and ‘The Wonderful Adventures of Nils Holgersson’. The latter has been translated into over 30 languages.

Selma was a politically active woman – involved as a speaker for the Swedish Suffragette movement, and herself living in a controversial same sex relationship. She was also a vocal anti-nazi.

The house where Selma Lagerlöf was born on 20 Nov 1958, grew up and later lived is today open to the public as a museum. If you’d like to visit, it’s in the county of Värmland and can be checked out at Mårbacka