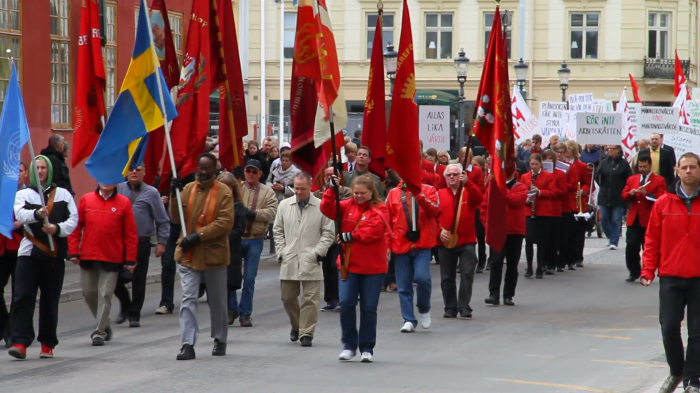 In Sweden, and in many other countries, May 1st has been embraced as the International Workers’ Day. In 1938, May 1st became Sweden’s first non-religious public holiday and has been an important celebration of labourers and the working classes since then. When it lands on a weekend, like this year, the day off work is ‘lost’ as no public holiday is replaced in lieu.

But why specifically May 1st?

The answer is found in a massacre in the USA. On 1 May 1886, laborers in Chicago went out on strike for an 8 hour working day. On 4 May 1886, Chicago police and the demonstrators clashed and 11 people died.

The event is called the Haymarket massacre. Seven of the demonstrators were sentenced to death, despite lack of evidence. To commemorate the massacre, the socialist organization suggested that 1 May should become day of demonstrations every year.

Around Sweden, traffic is shut off, huge flag-waving demonstrations are held and people gather to hear speeches from their politicians and representatives. The demonstrations represent people from various parties. However, since most of them are from the political left, the streets are awash with bright red flags and banners.

Contrary to the stereotype, not everybody in Sweden supports left wing political groups. Many Swedes lean towards the centre or the right. For them, today is just a day off work – an opportunity to perhaps nurse hangovers from the festivities of the previous evening or to relax, watch Netflix, go for a walk and enjoy the day.