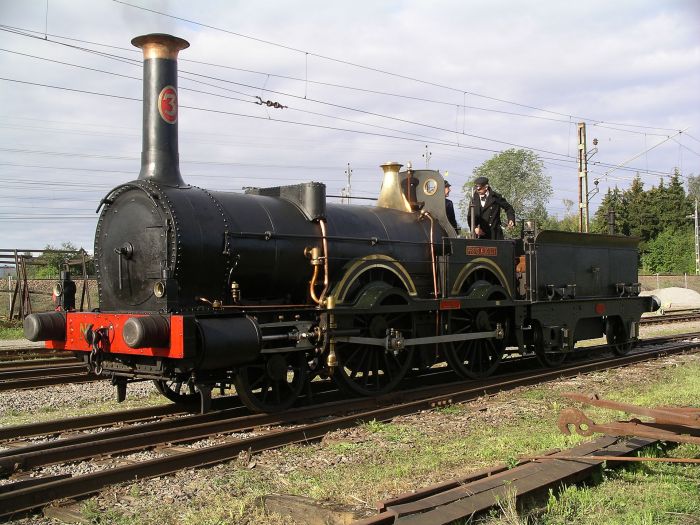 The Swedish train system is notorious for its lack of reliability and continuous delays. Anybody who travels by train in Sweden has probably called it stupid, or worse, in anger or frustration. However, this is not where the Swedish expression (you are) ‘more stupid than the train’ comes from.

To understand the origin of this expression, we have to travel to my home country of England and to the end of the Industrial Revolution. In the 1800’s the rail industry was booming and in 1856 Sweden imported a train from the UK, pictured above.

A Swedish tradition is to give names to trains, and this particular train was christened ‘Prince August’ after King Oskar I’s youngest son. Prince August was well-known across the country for not being the brightest light in the Christmas tree. His weak intellect was well referred to in stories of the time. This was a period in history, however, when open criticism of the Royal family borded upon treason. So, the people created an expression – more stupid than the train – to describe somebody’s idiocy while at the same time referring ‘discretely’ to the royal fool by referencing the train of the same name.

This tradition of naming trains, and train carriages, still exists in Sweden today. Only this morning I travelled in a carriage called Pippi, but I’m afraid it wasn’t much of an adventure. Here is a list of all the carriage names on the Stockholm underground – see if your is there!

I was at an interesting lecture this week with researchers Kirsti Jylhä, Jens Ryding and Pontus Strimling. They were presenting the results from their research at the Institute of Future Studies into who are the Sweden Democrat’s (SD) voters, why do they vote for SD and where are they from? It’s taken me a while to mentally process and summarise what they said, but here is my take on it.

The research was carried out in the form of questionnaires on several thousand voters. The research tried to look at attitudes, origins, demographics and world views.

The majority of the SD voters have moved from Socialdemocratic party (S) and conservative Moderates (M). 62% of the supporters are more likely to vote M in the future, if they don’t vote SD.

The SD voter has a higher level of trust towards other Swedes than to those born outside of Europe with almost 70% saying they would prefer a native Swede as a neighbour rather than a foreigner. This was 19% for S voters and 37% for M voters.

The vast majority of the participants in this research were highly skeptical towards the government and other authorities. They have an innate, higher suspicion of politicians, media and the legal system than M or S voters. They also have a larger tendency to believe in conspiracy theories.

Previous research suggests that supporters of populist parties tend to be dissatisfied and marginalised by society. This research does not support that. Quite the opposite, SD voters are satisfied with their lives and their current situations and they do not perceive their quality of life has been reduced during the last four years. However, a common concern they have is that their standard of living with get worse in the future due to costly changes in society. In comparison to S or M voters, they have a much weaker optimism about the future.

Tolerance and respect not important

In comparison to S and M voters, SD voters tend to think tolerance and respect are not important qualities. In the raising of children, obedience is seen as a more important quality. However, the research could not prove a larger lack of empathy amongst SD voters compared to others.

37% of SD voters in the research had a higher education (eg university). Amongst S voters this is 44% and 57% amongst M. The majority of SD voters are working class.

SD voters in much higher numbers have a conservative and authoritarian view of society. For example, over 70% think that feminism has gone too far and it is the role of the man to support the family. Over 60% believed that a strong leader is necessary to control unwelcome behaviours in a society.

So, are SD voters stupid, racist and irrational? Judging by this research the answer is no. They are skeptical, critical and fearful.

And they are highly rational. It makes rational sense for them to navigate towards a party that resonates most with their attitudes.

Today is Election Day and soon we will see the result. What will win in Sweden? Will it be skepticism, criticism and fear? Or will it be pragmatism, openness and optimism?

To see the full report, go to http://www.iffs.se and look under publications.

I know, i know. It sounds gross doesn’t it? ‘Sweden’s politicians are slut spurting.’ However disgusting it might sound, it is exactly what they are doing.

With one week to go to the election, all the parties are in the final throws of their campaigning. In this final week, they try to get their message across by turning the gear up a bit. This final sprint to the finishing line is called a ‘slutspurt’ in Swedish. It’s often used to describe the final hurried days of a sale.

And it’s what they’re all doing.

They’re slut spurting on the tv, in the streets, in the media. It’ll be a relief when it’s all over I expect. That much spurting can’t be good for you.