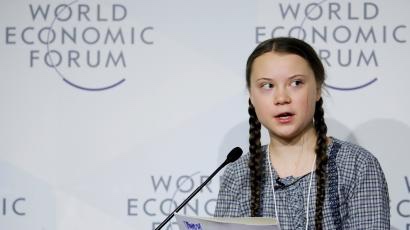 Unless you’ve been living under a rock for the last decade, the imminent threat of climate change can not have escaped you. Many people the world over are concerned, if not terrified, about the future of our planet. The word ‘klimatångest‘ has popped up in the Swedish language – climate anxiety – to reflect the growing stress people are feeling as the weather changes and the earth burns.

In contexts of concern, unlikely heroes often rise up, and many of them are women. Women who sit in the white section of the bus, women who attack neo nazis with their handbags, women who protest school shootings in USA, women who bite back against haters and mysogynists on social media. Women who take no shit.

Such a young woman is the Swedish climate activist Greta Thunberg. At 16 years old, she has made headlines for her bravery, her directness and the fact that she calls us out – the older generations who are failing her generation. Currently in the snow topped village of Davos, she is attending the World Economic Forum. She attacked, in a speech, the wealthy who continue to earn money at the expense of the earth’s resources. She criticised them for flying in on private jets instead of travelling the train, as she did, for 30 hours. It was like seeing David defeat Goliath. Listening to her, the powerful audience gave a weak, unconvinced round of applause. It’s clearly uncomfortable to be called out by a 16 year old Swede.

What’s amazing about Greta Thunberg is her conviction and her single-mindedness. She puts it down to her Aspergers diagnosis saying she can focus on what’s important instead of focusing on the ‘social game that seems to be so important for so many people’.

It’s wonderful to watch her, and listen to her as she continues to tear a hole in the establishment with her wit and uncompromising fierceness. And it’s a reminder that we don’t need to look to our elders to find inspiration. It can certainly be found by looking at the generations behind us. Tomorrow’s heroes are there. They want change and they have a sense of urgency.

Greta Thunberg wants us to act as if the house is on fire.

Because, in her words, the house is on fire.

Yesterday I wrote about the word quisling, meaning traitor, which is used in English but is actually borrowed from Norwegian. This made me curious about what English words are borrowed from the Swedish language.

After a little research, here are the top 10 (in alphabetical order):

Yesterday I wrote about the word quisling, meaning traitor, which is used in English but is actually borrowed from Norwegian. This made me curious about what English words are borrowed from the Swedish language.

After a little research, here are the top 10 (in alphabetical order):

Sweden might have a government soon. Months after the general election, an unconventional middle coalition seems to be forming, which includes former opposition parties from left and right. All of this is an attempt to keep an extreme right wing party out of the government. However, it’s not without its critics.

One party in particular – the right-oriented Center Party- have been strongly criticized for being turncoats and traitors. One disgruntled politician called the leader of the Center party a quisling. While we use this term in English, I was curious to check into where the word comes from and why it is such a serious insult.

According to Wiki, quisling is a term originating in Norway, which is used in all the Scandinavian languages and in English for a person who collaborates with an enemy occupying force – or more generally as a synonym for traitor. The word originates from the surname of the Norwegian war-time leader Vidkun Quisling who headed a domestic Nazi regime during the Second World War.

Interestingly, the use of the word quisling predates the war though. In 1933, the term was used to describe the followers of Quisling who was in the process of starting a national fascist party based on the German nazi model.

In 1940, Quisling attempted to seize power in Norway, as he wanted to collaborate with Hitler. His coup d’etat failed, and he and his followers were declared criminals. In the British Times the headline was ‘Quislings everywhere’, and the term became synonymous with traitor – a word to ‘carry the scorn of mankind throughout the centuries’, to quote Winston Churchill.

So there we have it. A word taken from a pitiful, slithering fascist who was a traitor to his country and collaborated with an enemy power. Sounds more like a description of Trump if you ask me.

It seems then definitely out of proportion that the word is currently being used to describe the leader of Sweden’s Center party.

Of course many people are disappointed, and she has had to make some difficult compromises. But there is one promise she has not backed down on, however difficult it might be – to never give fascists a position of power in Swedish politics. And though not ideal for her, she has moved to the middle to prevent this.

The irony then is in the fact that she is being called a quisling. She is not a quisling, she is in fact the complete opposite.

The Swedish word for Sweden is Sverige. Have you ever wondered why then Sweden is called Sweden in English?

Well, like all etymology of words, the explanation can be found centuries back and in a different country. In fact, the English name was loaned from the Dutch language in the 17th century. It is based on Middle Dutch Zweden, the Dutch name of Sweden. In turn, the name Zweden is the dative plural of  Zwede (Swede). Country names based on a dative plural and adding -n were the norm in German and Dutch in the 15th century – other examples are the German Italien “Italy” and Spanien“Spain”. These are also actually the words in Swedish for those countries.

What about before the 17th century when England borrowed the name Sweden from the Dutch? Well, clearly Sweden existed, and indeed it was called something else – Swedeland. And in early Old English, the country was known as Sweoland or Sweorice. Sweorice translates as the realm of the Sveonas – who were a Germanic tribe of the Sviar (a Norse tribe).

It’s not clear why the English suddenly changed to the Dutch version, but it may have been due to siding in conflicts or to make trading and communication easier.

So yesterday’s Swedeland is today’s Sweden. Personally, I think Sweorice has a nice ring to it, and is seems closer to the Swedish word Sverige. 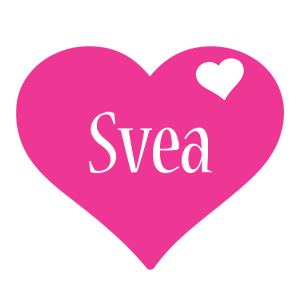 Today is Svea’s Name’s Day. And October 8th is my Name’s Day. Well, not quite….but almost. It is Nils. And since I’m called Neil, well, I take Nils as my day.

Some of you might be wondering what the hell I’m talking about. What is a ‘Name’s Day’? Well, it’s like this. In Sweden, every day has a name, sometimes two. And if your name happens to be represented in this way in the calender, then you can celebrate your day. Strange? Maybe. Unusual? Not really.

A Name’s Day is actually a tradition in lots of countries such as Bulgaria, Croatia and Ukraine. According to Wiki, the custom originated with the Christian calendar of saints: believers named after a saint would celebrate that saint’s feast day. In Sweden, however, there is no longer any explicit connection to Christianity. It’s been a tradition since the Middle Ages and started because the church wanted the people to celebrate Name’s Days instead of birthdays which they viewed as a pagan tradition.

There are different lists though some names are celebrated on the same day in many countries. In 1901 a comprehensive modernization was made in Sweden to make the list up to date with current names. This also happened in Finland, but not in other countries.

But Name’s Days are not without their controversy. The monopoly on calenders, held by the Royal Swedish Academy of Sciences, expired in 1972 and so did the official name day list. And then all hell broke loose. Competing lists emerged and finally in 1986 a new list with three names on each day was designed to create harmony in the Name’s Day chaos. But people weren’t happy. Seven years later, this list was revised and reduced to two names per day. But Swedes were still dissatisfied with this and the Swedish Academy produced a new two-name list which was finally accepted and brought into use in 2001. Although it does not have the official status of older lists, it is now universally used in Sweden.

One alternative calender, however, is the Diversity Calender which appoints each day with a more diverse selection of names to represent modern-day society.

How this tradition arrived in Sweden is unclear. Maybe it was imported by foreign religious leaders or merchants, or maybe it’s to do with the fact that the Swedish Protestant Church retains some traditions similar to the Catholic. Whatever the origin, it’s a reason to celebrate. And Swedes love to celebrate!

If you’d like to check out if you’re privileged to have a Name’s Day go to www.dagensnamnsdag.nu

January 1st is the day in Sweden when most pizzas are sold. Whether laziness, apathy or hangover cravings lie behind it, a pizza is ordered every second on New Year’s Day.

Fast food pizza company Onlinepizza has released statistics on the most sold pizzas in Sweden during 2018. Apart from personally designed toppings, the winner at almost 20% is the Kebab pizza – a dubious Swedish classic. Consisting of cheese, tomato and sliced kebab meat, the popular pizza is a real fat bomb. You can see it pictured above.

In second place is the Vesuvio with smoked ham, in third place comes the pineapple-strewn Hawaii pizza. Fourth is the hammy Capricciosa and fifth is the humble Margarita.

Are you eating a pizza today? If so, what type have you ordered?