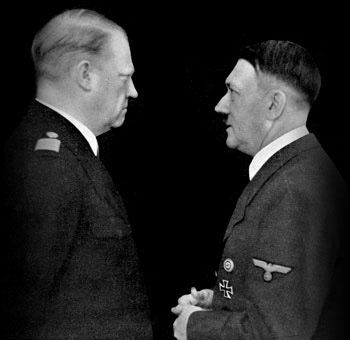 Sweden might have a government soon. Months after the general election, an unconventional middle coalition seems to be forming, which includes former opposition parties from left and right. All of this is an attempt to keep an extreme right wing party out of the government. However, it’s not without its critics.

One party in particular – the right-oriented Center Party- have been strongly criticized for being turncoats and traitors. One disgruntled politician called the leader of the Center party a quisling. While we use this term in English, I was curious to check into where the word comes from and why it is such a serious insult.

According to Wiki, quisling is a term originating in Norway, which is used in all the Scandinavian languages and in English for a person who collaborates with an enemy occupying force – or more generally as a synonym for traitor. The word originates from the surname of the Norwegian war-time leader Vidkun Quisling who headed a domestic Nazi regime during the Second World War.

Interestingly, the use of the word quisling predates the war though. In 1933, the term was used to describe the followers of Quisling who was in the process of starting a national fascist party based on the German nazi model.

In 1940, Quisling attempted to seize power in Norway, as he wanted to collaborate with Hitler. His coup d’etat failed, and he and his followers were declared criminals. In the British Times the headline was ‘Quislings everywhere’, and the term became synonymous with traitor – a word to ‘carry the scorn of mankind throughout the centuries’, to quote Winston Churchill.

So there we have it. A word taken from a pitiful, slithering fascist who was a traitor to his country and collaborated with an enemy power. Sounds more like a description of Trump if you ask me.

It seems then definitely out of proportion that the word is currently being used to describe the leader of Sweden’s Center party.

Of course many people are disappointed, and she has had to make some difficult compromises. But there is one promise she has not backed down on, however difficult it might be – to never give fascists a position of power in Swedish politics. And though not ideal for her, she has moved to the middle to prevent this.

The irony then is in the fact that she is being called a quisling. She is not a quisling, she is in fact the complete opposite.