Today’s word is ‘Nobeldagen‘ which translates as ‘Nobel Day’.

Nobel Day is not actually anything to do with Christmas. However, it is a traditional part of the lead up to Christmas. Every year on 10 December, since 1901, the Nobel Prizes are awarded. The date commemorates the death of Alfred Nobel in 1896.

With celebratory lectures, ceremonies and concerts, the day culminates with a banquet in the City Hall. The banquet lasts about 3 and a half hours and is televised. It is an extremely grand and formal occasion. Everything from the porcelain to the floral arrangements to the dresses, the entertainment and the menu are under scrutiny for the tv viewers.

The guests include not only the Nobel laureates and their families, but also Swedish royals and aristocrats, politicians, ministers, celebrities and other notable people. Even though there are 1300 guests, is virtually impossible for ordinary folk to get an invitation to the banquet. We have to enjoy it from afar, via the flat screens in our living rooms.

However exclusive the whole thing might be, it is still a welcome splash of glamour in the dark approach to Christmas. 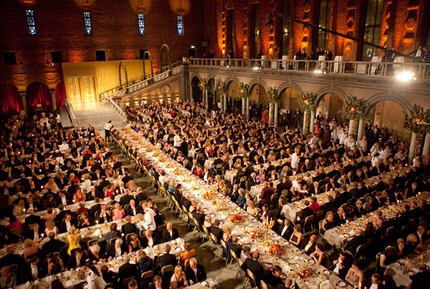 Welcome to the Watching the Swedes Advent Calendar. Every day, I will open a window containing a Swedish word that has something to do with Christmas and the festive season.

Today’s word is ‘Julbelysning‘ which translates as ‘Christmas lights’. 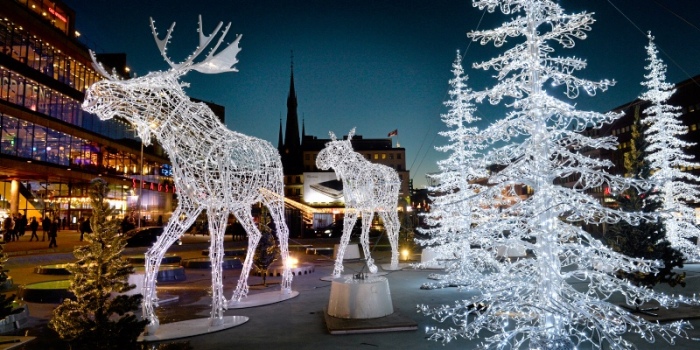 Like others around the world, Sweden’s cities and towns install public Christmas lights this time of the year. These decorations illuminate the dark December days and are an important part of building up the Christmas cheer at an otherwise miserable time of the year.

Currently in Stockholm, one million lights have been lit and the city is populated with twinkling elk, reindeer, pine cones, angels, stars and fir trees. Gothenburg, on the other hand, has heavily reduced their Christmas decorations this year saving 2 million Swedish kronor in the process. In Malmö, 400,000 lights have been switched on and brighten up bridges, squares and streets.

Since 1996, on Skeppsbron in Stockholm, the city’s largest Christmas tree has been positioned. An enormous, impressive tree that towers over the buildings of the Old Town and spreads its light over the harbour. The tree in actual fact isn’t a real tree – it is constructed over a central pole with branches attached to it. In doing so, the tree is pleasingly symmetrical. 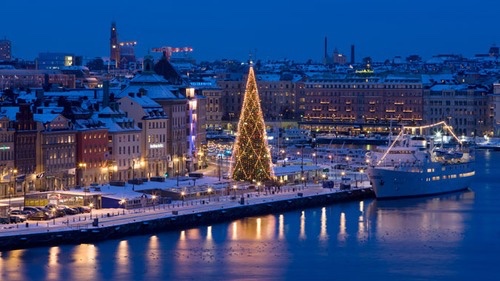 If you’d like to walk around and see the lights in Stockholm, the city has produced a map which you can find here.

Today’s word is ‘Ernst‘ which translates as, well… Ernst. 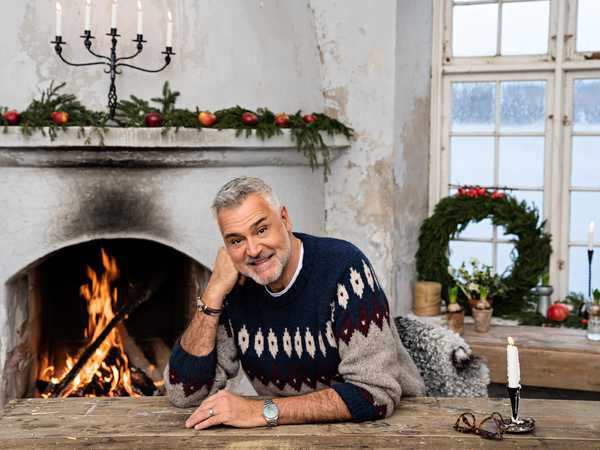 What on earth is an Ernst you might wonder? Well, the question should rather be ‘who’ is Ernst. Ernst Kirschsteiger is a person who, by many, is considered to be Mr Christmas in Sweden. He is a very popular interior designer who currently has a TV program called Ernst’s Christmas.

In his program he simply explodes festive spirit. He decorates and bakes and creates. He wallpapers and chisels and hammers. He sews and paints and he crafts. I would describe his design ethic as a nature-oriented retro scandi chic. He has a poetic, philosophical attitude to interior design coupled with practical solutions. This week he made, for example, Christmas decorations out of mandarin peel and wire and inspired us with a wreath of dried garden flowers, moss and brussel sprouts.

Some people find him very cheesy and goofy but he has definitely cornered the market on Christmas coziness. Many viewers see him as the idea of male perfection – a sensitive man who cooks, builds and decorates the home – all wrapped up in one sweet Christmas treat.

Since his tv debut in 2000, Ernst Kirschsteiger has grown to be a phenomena who only needs referring to by his first name, like Cher, Madonna and Prince. So popular is he that a book of his quotes and poetic wisdoms called ‘Ernstologi’ was released in 2006 and became a popular Christmas present that year.

If you want to witness the phenomena (in Swedish however), watch this YouTube clip and enjoy!

Welcome to the Watching the Swedes Advent Calendar. Every day, I will open a window containing a Swedish word that has something to do with Christmas and the festive season.

Today’s word is ‘Julskinka‘ which translates as ‘Christmas ham’ and is pronounced yule-hwinka (ish).

In the UK, I grew up eating roast turkey at Christmas. But in Sweden, it’s the ham that counts! 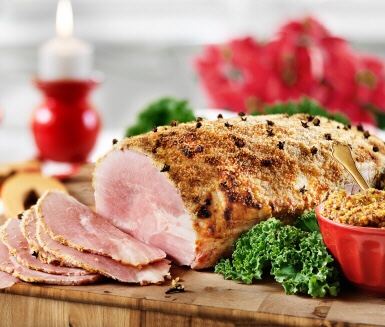 Swedes have been eating Christmas ham during the festive season since the 1800’s and many people consider it an obligatory part of the Christmas meal. Traditionally the cured ham is oven baked or boiled before it is coated in mustard and breadcrumbs and grill roasted. Here is a recipe.

The ham is often eaten with mustard and apple sauce. And the cold leftovers are eaten for days afterwards.

Many people these days don’t eat meat, and there are plenty of veggie alternatives to the julskinka from soya and Quorn hams to roasted cauliflower heads.

Today’s word is ‘Julmarknad‘ which translates as ‘Christmas Market’ 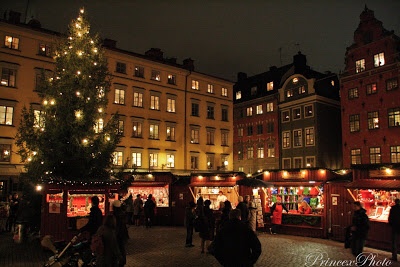 A popular recurring event during the weeks leading up to Christmas in Sweden is the Julmarknad – the Christmas Market.

Christmas markets are a very cosy affair. Here you can walk around and enjoy the smell of glögg and roasted chestnuts. You can listen to the sound of Christmas carols echoing through the air. You can bathe in the lights and decorations strewn around the marketplace. And you can see traditional handicrafts and locally produced goods on sale, such as scarves, hats, festive food and decorations. If you’re lucky, snow is tumbling down and crunching under foot.

Christmas markets have been around in Sweden since the 1800’s and take place up and down the country on town squares, in gardens, in museums, farms, barns, greenhouses, castles, garden centers and stately homes.

For a list of some recommended markets, check here.

Today’s word is ‘Julmust‘ which is a fizzy Christmas beverage. 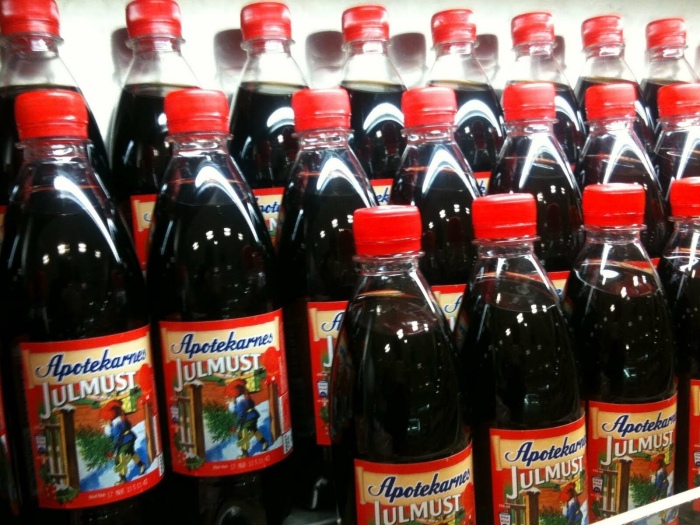 I would venture to say every Swede likes to drink at least one glass of julmust at Christmas. However, according to statistics it is even more! Apparently Swedes drink an average of 5 litres per person of the fizzy drink during December. The alcohol-free soft drink is bought in bottles at the supermarket and comes in different sizes, fully sugared and also in a diet form.

Said to include over 30 ingredients, its actual recipe is top secret, only known to three people. Despite all the cloak and dagger stuff, the connoisseur can detect the flavour of hops and malt. The taste is reminiscent of the old-fashioned ‘Dandelion and Burdock’ drink for those of you that understand that British reference.

Julmust was invented by a teetotaler and sales began in 1910 as an alternative to ale and port. Although intended to be alcohol-free, the drink is often blended into Christmassy cocktails or mixed with porter or stout and other ingredients to create a Christmas drink called Mumma.

I have even drunk it mixed with red wine – a so called Kalimusto. I recommend trying the experience – although it actually is a fairly unpleasant one!

Today’s word is ‘Julkalendern‘ which translates as ‘Christmas Calendar’ 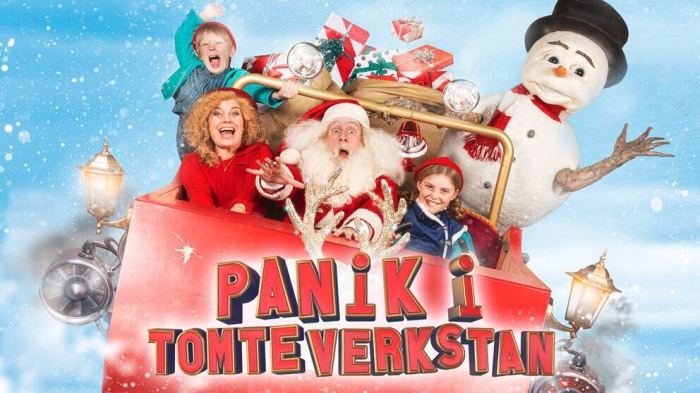 Julkalendern is a television series broadcast on Swedish TV every day in December leading up to Christmas Eve. It is a popular and heavily-anticipated program that children and adults traditionally watch at 7.15 in the morning (or on line). Typically each episode is 15 minutes long, and every year there is a new story.

This year, the series is called ‘Panic in Santa’s workshop’ and stars many popular Swedish actors. And according to the latest statistics, it has already broken the viewing records of previous years. It has caused some controversy, which is not unusual, with parents complaining about the suitability of the content for children.

But controversy and complaints aside, Julkalendern endures as a self-evident and undeniable part of the Swedish lead up to Christmas.

Today’s word is ‘Gävlebocken‘ which translates as ‘The Gävle Goat’. 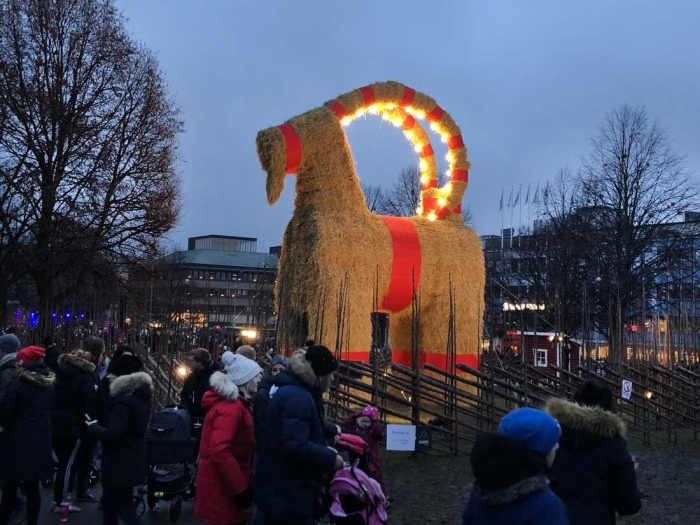 This strange tradition takes place in the Swedish town of Gävle. Every year, a giant handcrafted straw goat is built on the town’s Castle Square. And almost every year, it gets burned to the ground by a pyromaniac. One year, it was even burned down before its inauguration. Consequently, the local authority have increased security and have managed to prevent the burning for the last three years.

The symbol of the goat is a traditional Christmas decoration in Sweden, called a ‘julbock’ – a Christmas goat. Usually made of straw, a goat is placed under the Christmas tree or small goats are hung from the branches. The symbol of the goat has ancestry in Scandinavia far back in Nordic mythology and, up to the 1800’s, it was the goat who brought presents during the festive season. A kind of precursor to Santa Claus.

So although the Christmas goat has endured for centuries, it remains to be seen if the Gävle goat survives until the New Year.