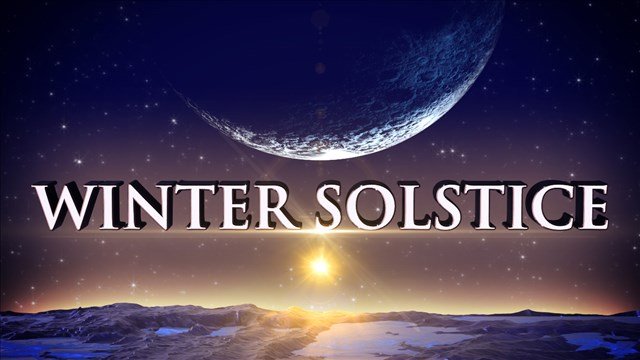 Today, Friday Dec 21st is the longest night for people in Sweden and the rest of the northern hemisphere. At this time of year, it doesn’t get much darker than this. In Swedish, there’s an expression – now we’re moving towards brighter times – and it’s really relevant today, as from tomorrow the amount of daylight will gradually extend until June.

But this year, the solstice isn’t the only celestial show in the coming days. A full moon known as the Cold Moon will take place on Saturday. The moon will appear full for a few days. However, it is the first time it coincides with the winter solstice since 2010. It won’t occur again until 2094, by which time most of us will be dead. In addition to the full moon, a meteor shower will take place on Friday and Saturday nights, according to NASA.

So it might be dark and dreary outside, but look up to the sky. You might just witness something spectacular – and I don’t mean Santa and his sleigh.

A Chinese proverb says this,

‘It’s better to light a candle than to curse the darkness’.

Never was this more true than today. Lucia day. At the darkest time of the year, when we all are drained by the black mornings and afternoons in Sweden, Lucia pays us a visit. With candles in her hair and surrounded by her handmaidens and boys in a procession, Lucia shines light into the dark depths of our spirits. And slowly, slowly, the day awakens.

Lucia traditions are celebrated in Sweden, Norway, Denmark, Italy, Latvia, Estonia, Finland, Hungary, Malta, Bosnia, Bavaria, Croatia, Slovakia and St. Lucia, West Indies. But where does she come from and why is she one of the few Saint’s days celebrated in Sweden?

Santa Lucia is believed to have been a Sicilian saint who suffered a martyr’s death in Syracuse, Sicily around AD 310. She was seeking help for her mother’s long-term illness at the shrine of Saint Agnes, in her native Sicily, when an angel appeared to her in a dream beside the shrine. As a result of this, Lucia became a devout Christian and refused to compromise her virginity in marriage. Officials threatened to drag her off to a brothel if she did not renounce her Christian beliefs, but were unable to move her, even with a thousand men and fifty oxen pulling. So they stacked materials for a fire around her instead and set light to it, but she would not stop speaking. One of the soldiers stuck a spear through her throat to stop her, but to no effect. Soon afterwards, the Roman consulate in charge was hauled off to Rome on charges of theft from the state and beheaded. Lucia was able to die only when she was given the Christian sacrement.

The tradition of Santa Lucia is said to have been brough to Sweden via Italian merchants and the idea of lighting up the dark appealed so much that the tradition remained. The current tradition of having a white-dressed woman with candles in her hair appearing on the morning of the Lucia day started in the area around Lake Vänern in the late 18th century and spread slowly to other parts of the country during the 19th century.

So, it might be cold and dark outside, but inside it’s light. And the light is always stronger than the darkness. Keep your light lit, and you will never feel the darkness.