Window 12. Today’s word is ‘Julstjärna‘ which translates literally as Christmas star and is a plant. It is pronounced ‘yule hwaerna’ (ish). 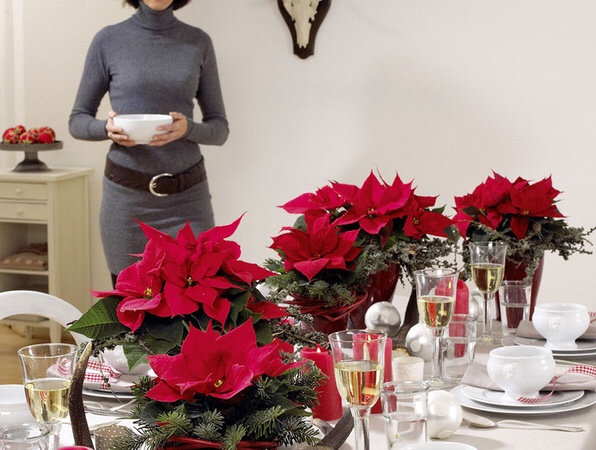 The Christmas star – ”Julstjärna” – is a plant originating in Mexico, that is popular as a decoration at Christmas time in Sweden. In the wild, it can grow to be several meters tall.

Its English name is poinsettia, named after Joel Roberts Poinsett, who was the first US minister to Mexico and who was credited with introducing the plant to the USA in the 1820’s. Actually, today December 12 is international poinsettia day, the anniversary of the death of Mr Poinsett.

The ‘julstjärna’ is not a plant that one sees very often during the rest of the year in Sweden, but suddenly at Christmas it explodes onto the scene and is a feature in most offices, homes and public buildings.

The flower has dark green and red leaves which is why it is popular at Christmas I guess. It also comes with white leaves, pink leaves and speckled leaves. The leaves are shaped a bit like a star, and I am assuming that where the Swedish name ‘Christmas star’ comes from. In Sweden, approximately 9 million ‘julstjärnor’ are bought every year.

Other popular flowers and plants that Swedes decorate their homes with at Christmas time are, amongst others, the towering amaryllis, the fragrant hyacinth, the romantic mistletoe, the tempestuous red tulip, and ilex – which are stiff branches with bright red berries on them