Nobel Day is not actually anything to do with Christmas. However, it is a traditional part of the lead up to Christmas. Every year on 10 December, since 1901, the Nobel Prizes are awarded. The date commemorates the death of Alfred Nobel in 1896.

Most laureates are happy to accept their prize and the accolade. However, Jean Paul Satre famously declined the Literature Prize in 1964, claiming he did not want to be institutionalized.

In 1974 he was joined by Le Duc Tbo who refused to accept the Peace Prize for his work to end the Vietnam War, saying ‘peace has not yet been established.’

In 1935, German journalist Carl von Ossietzky – a vocal critic of Hitler- won the Peace Prize. This led Hitler to bar all Germans from accepting a Nobel Prize. Three German laureates were subsequently forced to decline their awards. However, they later were presented with their diplomas and medals.

With celebratory lectures, conversations, ceremonies and concerts, Nobel Day culminates with a banquet in the Stockholm City Hall. The banquet lasts about 3 and a half hours and is televised. It is an extremely grand and formal occasion. Everything from the porcelain to the floral arrangements to the dresses, the entertainment and the menu are under scrutiny for the tv viewers.

The guests include not only the Nobel laureates and their families, but also Swedish royals and aristocrats, politicians, ministers, celebrities and other notable people. Even though there are 1300 guests, is virtually impossible for ordinary folk to get an invitation to the banquet. We have to enjoy it from afar, via the flat screens in our living rooms.

However exclusive the whole thing might be, it is still a welcome splash of glamour in the dark approach to Christmas.

Last year, and this year, there is however no banquet. Thanks to the Covid 19 pandemic and current restrictions, Nobel laureates receive their prizes at their local Swedish embassy instead. Stockholmers are instead treated to the light festival called Nobel Lights, which takes place around the city. 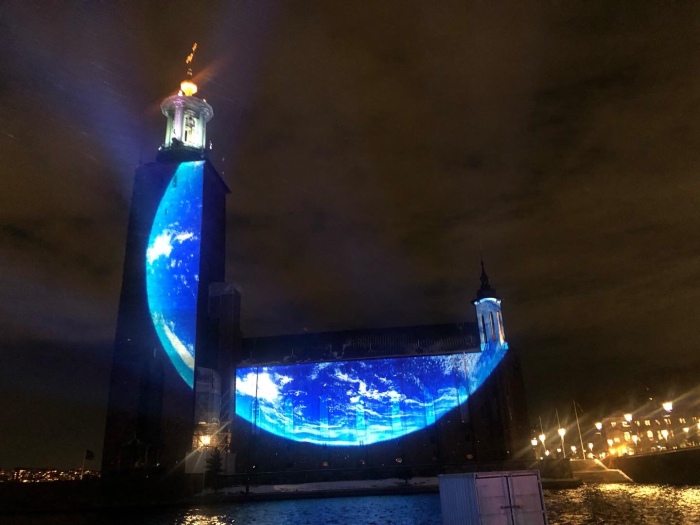 can be followed on http://www.nobelprize.org