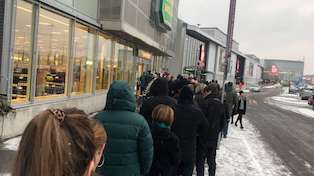 When visiting Sweden, people are often struck by the system for purchasing alcohol. In bars and restaurants everything goes as expected but if you want to buy a bottle of, for example, wine or whisky then this is done in the state-owned alcohol shops known as Systembolaget. These shops have restricted opening hours closing at 6 or 7pm on weekdays and 2 or 3pm on Saturdays. On Sundays and Public Holidays they are closed.

Sweden’s alcohol monopoly started in the 1800’s and the national company Systembolaget was formed in 1955.

Systembolaget has a retail network of circa 426 stores, around 25 in Stockholm. The company has an interesting mandate from the Swedish state – to help limit the medical and social harm caused by alcohol and thereby improve public health. This explains why access to alcohol is restricted through the number of stores, opening hours and retail rules, and why the corporation is aims not to maximise its profit. In other words, the alcohol monopoly is highly socio-political -its foremost aim is to stop people consuming alcohol, or at least to consume it responsibly.

Although strange for many visitors, it’s a concept that seems to work – Swedes consume on average 9.1 litres of pure alcohol per person annually, less than many other countries.

However, it is at times like Christmas that the restricted opening times become more obvious. This year, the shops are closed for 4 days from yesterday at 3pm. Up and down the country, long queues were reported. I saw this with my own eyes, and had a weird recollection of old pictures from the Second World War or Soviet Russia. People seemed to be in a good mood while they waited, though it meant waiting for almost an hour outside some branches.

I guess it’s the price you pay for lack of forward planning. Anyway, I hope everybody got what they wanted and that they have a boozy, woozy, snoozy Christmas worth queuing for.

One thought on “Swedes and their alcohol – a Swedish odyssey?”