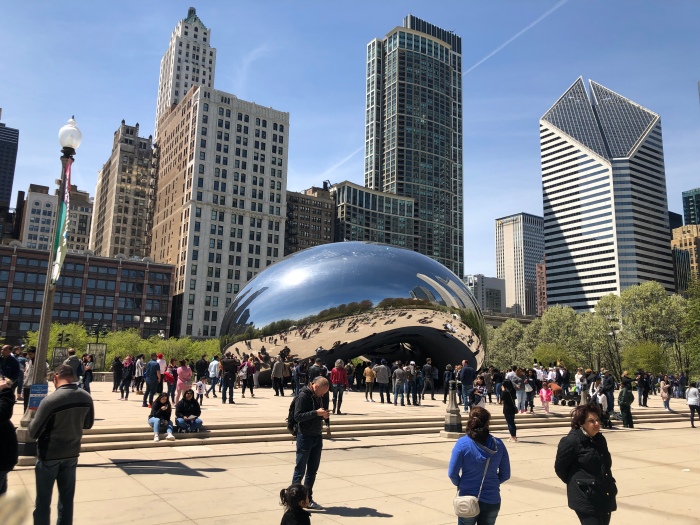 I’m currently in Chicago, and intrigued to learn more about its Swedish connections.

During the 19th and 20th centuries there was a mass emigration of Swedes to the USA. About 1.3 million people, an enormous number, are estimated to have left Sweden due to starvation, poverty and oppression.

By 1890 the U.S. census reported a Swedish-American population of nearly 800,000. Most immigrants became pioneers, clearing and cultivating the prairie in the Midwest, but some forces pushed the new immigrants towards the cities, particularly Chicago. At one point there were more Swedish people in Chicago than in any Swedish city except Stockholm. Chicago was Sweden’s second largest city in terms of population!

In Chicago, there are some remnants of Swedish history left. There are a number of famous Swedes hiding in Chicago. Carl Linnaeus has two statues, one on the University of Chicago campus in Hyde Park and one in the Heritage Garden of the Chicago Botanic Garden. Another icon Emanuel Swedenborg has a bust on Lake Shore Drive.

To the north of Chicago, there’s a neighborhood called Andersonville. Andersonville’s roots as a community extend well back into the 19th century, when immigrant Swedish farmers started moving north into what was then a distant suburb of Chicago. Swedish immigrants continued to arrive in Andersonville through the beginning of the 20th century, settling in the newly built homes surrounding Clark Street. Before long, the entire commercial strip was dominated by Swedish businesses. Today, Andersonville is a popular place to live and has festivities such as the Midsommarfest – one of Chicago’s largest and most popular street festivals.

The Swedish American Museum was founded in Andersonville in 1976, by Kurt Mathiasson, to preserve and disseminate the history of the great contributions of early Swedish immigrants to Chicago. The Museum was opened to the public in a ceremony attended by King Carl XVI Gustaf of Sweden.

Andersonville remains one of the most concentrated areas of Swedish heritage in the United States, but its residents and businesses represent a wide array of cultures. 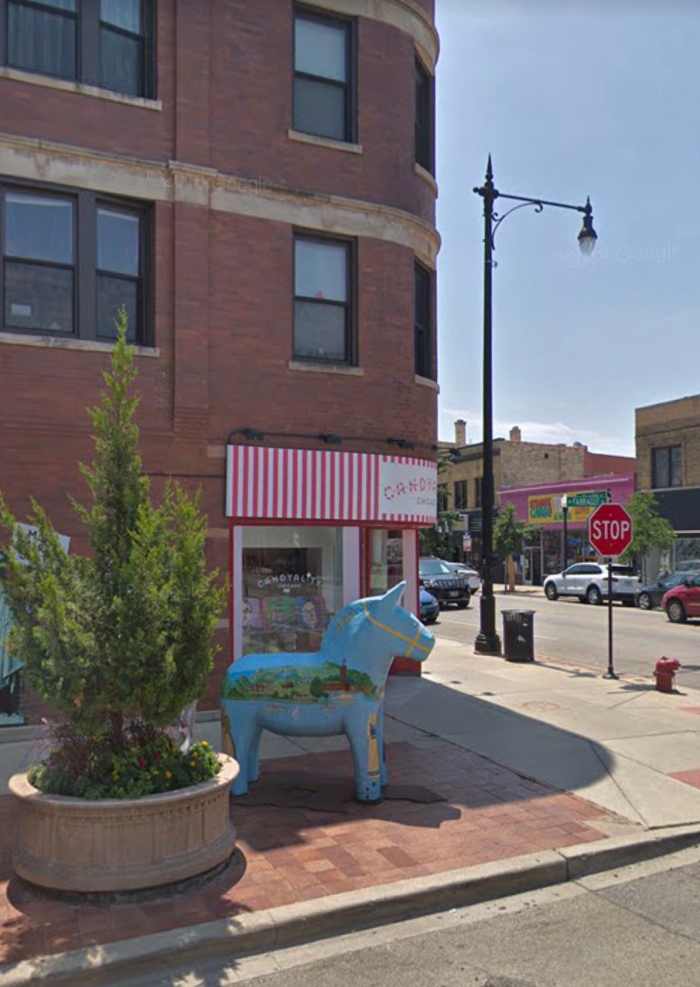 Today’s Swedes in Chicago are usually tourists visiting the Magnificent Mile and taking selfies in the mirrored bean statue. But it’s fascinating to remember that centuries before, a very different type of Swede trod these city streets. 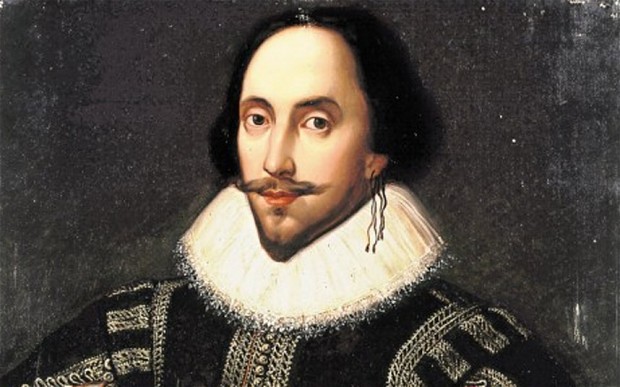 Today is May 1st 2016, celebrated in Sweden as in many other countries, with demonstrations, political speeches and parades. Most political parties, including the fascist party, have rallies and gatherings. One of the hot topics this year is immigration and the large increase of asylum seekers that have arrived in Sweden during the recent months. For some people in Sweden, these immigrants are a positive addition to Swedish society. For others the influx of immigrants is unwelcome, a problem that is perceived to bring with it social and societal disruption.

Reflecting over this situation, I hear echoes of something that happened in London on May 1st, 1517 – almost exactly 500 years ago – something known as ‘Evil May Day’.

During this period ín history, the reign of Henry the Eighth, Londoners were feeling unhappy with their situation. There was a great deal of misery, poverty and disease. As a consequence, they came to resent the presence of foreigners in the city, especially those seen to have money.  An inflammatory xenophobic speech had been made at Easter calling on all “Englishmen to cherish and defend themselves, and to hurt and grieve aliens for the common weal’.  Over the following two weeks there were sporadic attacks on foreigners and immigrants. On May Day 1517, it culminated, and a mob of thugs, liberated prisoners and others took to the streets and attacked foreigners and looted their homes. The under-sheriff at the time, the legendary Thomas More, tried unsuccessfully to dissuade them. Nobody was killed but several were arrested and charged with treason. Referring to the events of this day, William Shakespeare, many years later, wrote a text depicting the speech that Thomas More delivered to the rioters.

The voice of Shakespeare, who died 400 years ago last week, resonates through this text. The fascinating thing about it is that it is as relevant today as it was 400 years ago. This saddens me. The same forces at action centuries ago, are still in action today. This should be a reminder to all of us to be vigilant. Not everything, it seems, does change with time.

‘A Plea on behalf of Immigrants’ by William Shakespeare

Grant them removed, and grant that this your noise
Hath chid down all the majesty of England;
Imagine that you see the wretched strangers,
Their babies at their backs and their poor luggage,
Plodding to the ports and coasts for transportation,
And that you sit as kings in your desires,
Authority quite silent by your brawl,
And you in ruff of your opinions clothed;
What had you got? I’ll tell you: you had taught
How insolence and strong hand should prevail,
How order should be quelled; and by this pattern
Not one of you should live an aged man,
For other ruffians, as their fancies wrought,
With self same hand, self reasons, and self right,
Would shark on you, and men like ravenous fishes
Would feed on one another.

You’ll put down strangers,
Kill them, cut their throats, possess their houses,
And lead the majesty of law in line
To slip him like a hound.
Alas, alas! Say now the king
Should so much come too short of your great trespass
As but to banish you, whether would you go?
What country, by the nature of your error,
Should give you harbour? go you to France or Flanders,
To any German province, to Spain or Portugal,
Nay, any where that not adheres to England,
Why, you must needs be strangers: would you be pleased
To find a nation of such barbarous temper,
That, breaking out in hideous violence,
Would not afford you an abode on earth,
Whet their detested knives against your throats,
Spurn you like dogs, and like as if that God
Owed not nor made not you, nor that the claimants
Were not all appropriate to your comforts,
But chartered unto them, what would you think
To be thus used? this is the strangers case;
And this your mountainish inhumanity. 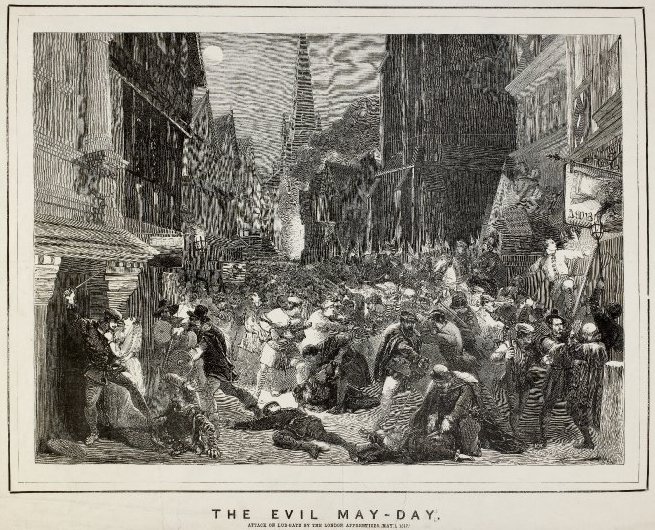