Several advertisements appeared in today’s newspapers in Sweden. The ads, from the Swedish Armed Forces, show how they support equal rights and will be participating in Stockholm Pride which starts tomorrow. This is one of the reasons I am proud to have Swedish citizenship.

”MORE IMPORTANT NOW THAN EVER. Uncertain times do not mean we stop defending human rights, everyone’s equal value and your right to live as who you are. That’s why we’re participating in Pride, this year again.”

Since March 8th,  I have been republishing a series to celebrate Great Swedish Women, past and present: women with strength and passion, women who create change. 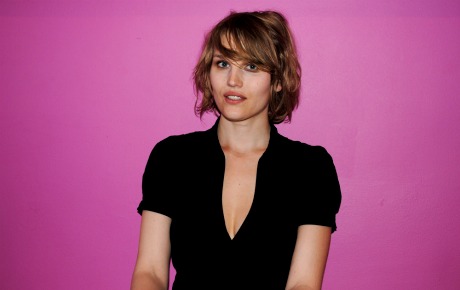 Aleksa Lundberg was born with the wrong body. She was born with a boy’s body and at the age of 22, she underwent corrective surgery and became physically a woman. She is the first actor in Sweden to have undergone gender reorientation. She is a strong, proud Swedish woman. But her transition hasn’t necessarily been smooth sailing – as a transwoman, she has experienced hate, disgust, rejection and ridicule.

Today Aleksa is a transactivist and works hard to change society’s view about transgender men and women and to reinforce the trans perspective in society and politics. She is a vocal representative and a fierce, sometimes provocative, oponent who is frequently seen in debate programs on television and in other media.

Aleksa’s political message is actually very simple. She wants to strengthen the rights of transgender people and also change the whole of society. Everybody, regardless of gender, race, sexual orientation, handicap should feel accepted, needed and loved. In a recent interview, she says:

‘Our sexuality doesn’t choose men or women. In the end, it’s about choosing a person. For me, it’s more about politics than romance that love is the the meaning of life. I hope that we can have a world where everyone actually understands that.’

Who can argue with that? Love is the key. Long live Queen Aleksa. 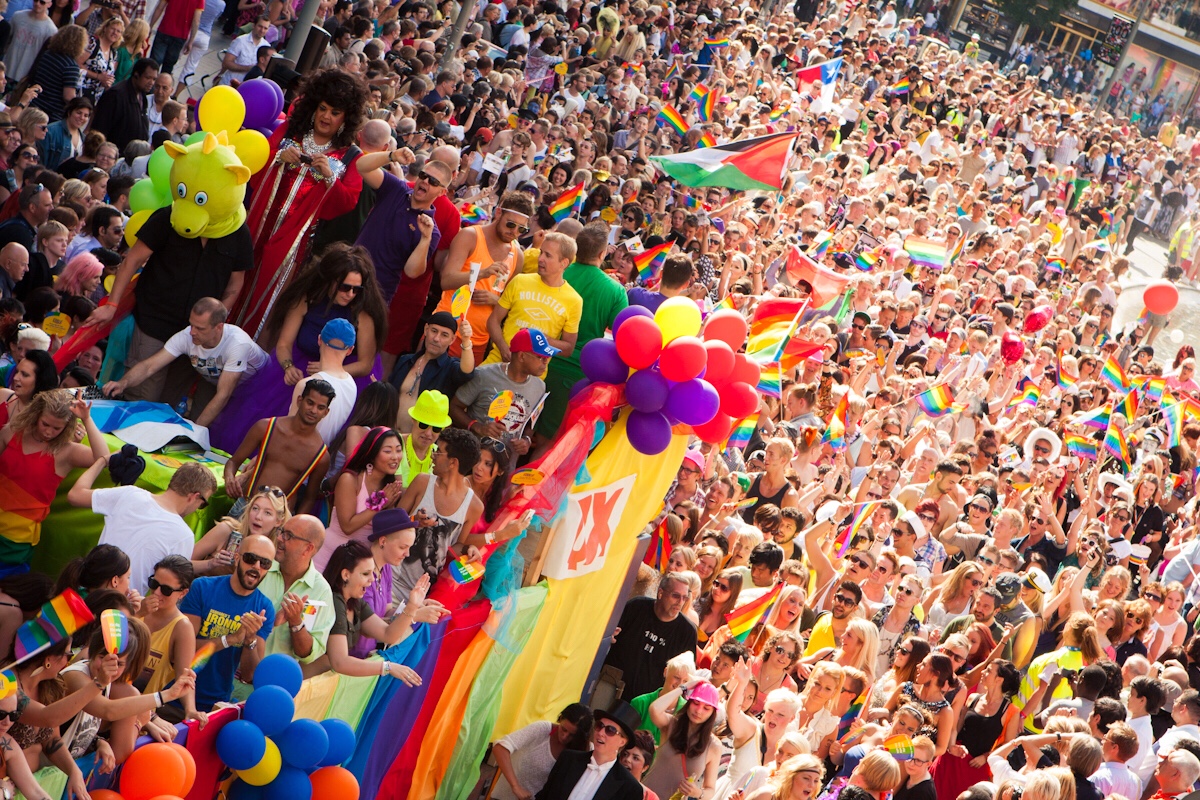 This year EuroPride comes to Sweden, being held in double cities Stockholm and Gothenburg. The whole concept of LGBT Pride has taken strong root in Sweden, and many towns up and down the country hold their own celebration. For example, today is Springpride in the midland city of Eskilstuna.

Currently there are 73 Pride festivals in Sweden during the year. From Arctic Pride way up in the north to Malmö Pride in the south, it is possible to celebrate throughout the year.

Swedes seem to have embraced the concept of Pride with open arms. There is, of course, a commercial benefit but the main reason seems to be that LGBT Pride resonates well with the societal Swedish values of equality, tolerance and acceptance. However, like everything, it has its opponents. Right wing groups occasionally organize counter demonstrations or, as in Eskilstuna yesterday, decide to put up homophobic, anti-Pride propaganda. Thankfully, these groups are small and as long as the majority of Swedes continue to stand up for Pride, they have little impact.

If you’d like to know where a Pride is near you, go to http://www.svenskapride.se which collects all the National events in one place.

Sweden’s history of LGBT rights is a comparatively progressive story. Changes didn’t happen automatically however. Thanks to the hard work of campaigners, lobbyists, and politicians, society can enjoy one of the most egalitarian legislations in the world. According to wiki:

‘ Same-sex sexual activity was legalized in 1944 and the age of consent was equalized in 1972. Homosexuality was declassified as a mental illness in 1979. Sweden also became the first country in the world to allow transgender persons to change their legal gender post-surgery in 1972 whilst transvestism was declassified as an illness. Transgenderism was declassified as a mental illness in 2008 and legislation allowing gender change legally without hormone replacement therapy and sex reassignment surgery was passed in 2013. After allowing same-sex couples to register for partnership in 1995, Sweden became the seventh country in the world to legalize same-sex marriage countrywide in 2009. Discrimination on the basis of sexual orientation and gender identity and expression has been banned since 1987. Also, since 2003, gay and lesbian couples can adopt children, and lesbian couples have had equal access to IVF and assisted insemination since 2005. Sweden has been recognized as one of the most socially liberal countries in Europe and in the world, with recent polls indicating that a large majority of Swedes support LGBT rights and same-sex marriage.’

Sweden is internationally known for its tolerance and openness and this means Stockholm is a great city to live in for members of the lesbian and gay community. However, visitors to the Swedish capital might be disappointed in the size of the gay scene. Where many other capital cities have gay neighbourhoods, or lots of gay and lesbian restaurants, cafés and bars to choose from, Stockholm's choices are limited.

One of the reasons for this is that the very tolerance and acceptance that exists in the city has led to a a general integration into the mainstream. Where other places around the world have needed to develop a strong and powerful subculture, it seems to have been less important in Sweden. This means that in Stockholm most places are mixed.

However, there are today a couple of bars, Torget in the Old Town is aimed and a young twinky fashionable crowd and Side Track on Södermalm aimed generally at the older and bear crowd and SLM for the fetish crowd. If you want to strut your stuff, a few clubs nights exist such as Patricia, Candy and Wonk. For a nice cup of coffee or a bite to eat head towards gay cafe restaurant Adams Bistro in the Odenplan area.

Other than occasional parties and club nights, there's very little just for lesbians and unfortunately nothing apart from interest groups exclusively for the transgender community.

For more information on venues grab the gay rag QX or visit http://www.qx.se. Also check here for gay beaches, gay-friendly beaches and cruising areas such as Långholmen, Frescati and Kårsön.

Once a year, Stockholm organises the biggest Pride festival in Northern Europe. Usually on the first weekend in August, Stockholm Pride is a real carnival and succeeds in balancing the playful, the sexual and the political. The festival attracts up to 60000 participants who take to the streets in pride. Pride week is usually packed with club nights and parties and definitely worth a visit.

But LGBT living isn't only about parties and festivals. In Stockholm's community there is a plethora of things to occupy yourself with. If you enjoy singing, you can listen to Stockholms Gay Choir, the oldest gay men's choir in Europe. They give concerts twice yearly at Christmas and in the spring and are well worth the modest entrance fee. If exercise is your thing, then Stockholm's gay rugby team Stockholm Beserkers are a good option. On frequent Sundays they compete, and they practice on Monday and Wednesday evenings on Årstafältet if you want to go along.

If swimming is your thing, Stockholm Dolphins practice at Eriksdalsbadet on Södermalm. For more info: http://www.qx.se

And for dancing outside of the clubs, why not give Queer Salsa a go? Check out Queer Salsa Stockholm on Facebook for more information 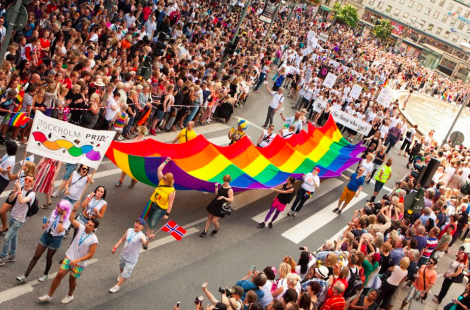