This year EuroPride comes to Sweden, being held in double cities Stockholm and Gothenburg. The whole concept of LGBT Pride has taken strong root in Sweden, and many towns up and down the country hold their own celebration. For example, today is Springpride in the midland city of Eskilstuna.

Currently there are 73 Pride festivals in Sweden during the year. From Arctic Pride way up in the north to Malmö Pride in the south, it is possible to celebrate throughout the year.

Swedes seem to have embraced the concept of Pride with open arms. There is, of course, a commercial benefit but the main reason seems to be that LGBT Pride resonates well with the societal Swedish values of equality, tolerance and acceptance. However, like everything, it has its opponents. Right wing groups occasionally organize counter demonstrations or, as in Eskilstuna yesterday, decide to put up homophobic, anti-Pride propaganda. Thankfully, these groups are small and as long as the majority of Swedes continue to stand up for Pride, they have little impact.

If you’d like to know where a Pride is near you, go to http://www.svenskapride.se which collects all the National events in one place.

Sweden’s history of LGBT rights is a comparatively progressive story. Changes didn’t happen automatically however. Thanks to the hard work of campaigners, lobbyists, and politicians, society can enjoy one of the most egalitarian legislations in the world. According to wiki:

‘ Same-sex sexual activity was legalized in 1944 and the age of consent was equalized in 1972. Homosexuality was declassified as a mental illness in 1979. Sweden also became the first country in the world to allow transgender persons to change their legal gender post-surgery in 1972 whilst transvestism was declassified as an illness. Transgenderism was declassified as a mental illness in 2008 and legislation allowing gender change legally without hormone replacement therapy and sex reassignment surgery was passed in 2013. After allowing same-sex couples to register for partnership in 1995, Sweden became the seventh country in the world to legalize same-sex marriage countrywide in 2009. Discrimination on the basis of sexual orientation and gender identity and expression has been banned since 1987. Also, since 2003, gay and lesbian couples can adopt children, and lesbian couples have had equal access to IVF and assisted insemination since 2005. Sweden has been recognized as one of the most socially liberal countries in Europe and in the world, with recent polls indicating that a large majority of Swedes support LGBT rights and same-sex marriage.’ 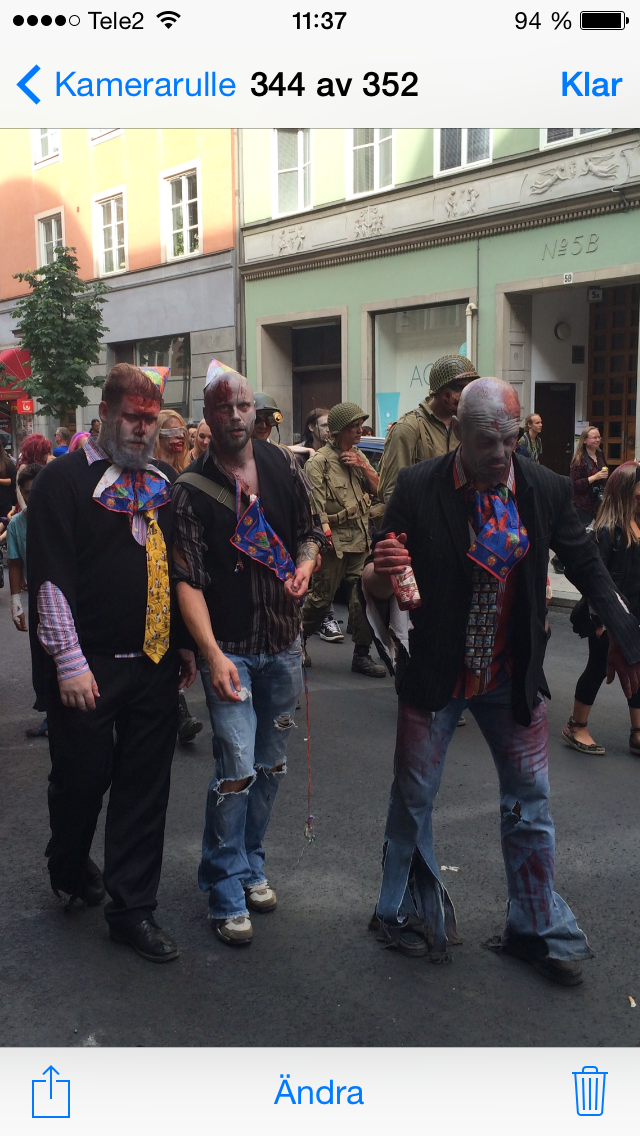 At some point in August, Stockholm becomes a fearful place. Hordes of zombies invade the city and bystanders should be careful not to get in the way. Starting in Östermalm, the zombies limp to a nearby underground station, where they travel the tube and arrive on Södermalm. Zombie nurses, zombie soldiers, zombie children, zombie clowns swarm out of the station and onto the street. Another sombre walk and they arrival at the zombie park to mingle and eat flesh. It’s a scary sight, not for the faint of heart.

There are masses of festivals going on in Stockholm all year. Whether you’re a beer drinker, a music follower, a fetischist, a poetry aficionado, a theatre buff, a choir lover or a stand up fan there is something for everybody. More information can be found on http://www.festivalinfo.se