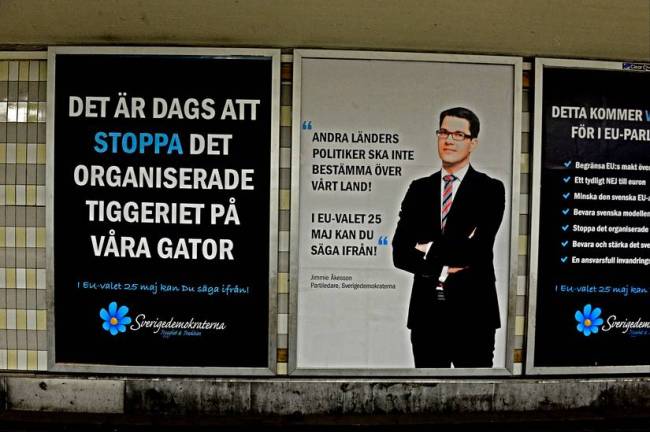 The EU campaigns are in full swing and Sweden’s right wing nationalistic party (SD) has already caused a stir. Huge signs have been put up in the underground and direct mail shots have been dumped in people’s letter boxes describing their policies. One particular policy is against ‘organized begging’.

From their program: ‘In Swedish Towns beggars from other EU countries have become a common sight…..The organized begging must be stopped. Visa requirements should be introduced for countries that abuse freedom of movement within the EU.’

This, and other policies, have caused outrage amongst many. People are calling for action against the SD, people are criticizing them for racist actions, people are burning, returning and even eating up their printed policy material.

But here’s the thing – SD are smart at rhetoric. Very smart. Just like other populistic nationalistic parties throughout history, they are very good at raising issues that ordinary people care about and they are not afraid of stating their position. Agree or not, they are the only party as far as I know to communicate an actionable position about the issue of begging.

And this is where I think the other parties are about to make a costly mistake. Almost everybody I know in Stockholm has an opinion about the influx of street beggars from other EU countries. Everybody is uncomfortable with it and doesn’t like it. It goes against the grain, and many Swedes are really divided as to whether they should ignore the beggars, buy food for them or give them cash. It is a daily challenge for many and a common topic of discussion. It is a modern dilemma, and, dear politicians…this makes it a pressing political issue! Ignoring the issue of begging will not make it go away. Ignoring it does not reduce anxieties nor does it deal with the underlying issues of poverty and inequality in our society.

The way for the Alliance, the Greens, Fi, the Left Party and the Social Democrats to deal with the SD is not only to express outrage and criticism. It is to state clearly, publicly and unequivocally what their party’s actionable policies are in relation to the increased begging on our streets.

Failure to do this is equivalent to pushing many voters straight into the hands of the SD.