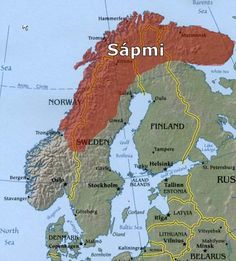 Did you know that Sweden has an indigenous people? I know, isn’t that cool?!

Just like Australia has the Aborigine and China has the Pamiri – Sweden has the Sami. For about 5000 years, the Sami people have lived way up in the arctic north of Sweden in the homeland they call ‘Sapmi’. Today Sapmi actually covers not only Sweden, but also Norway, Finland and Russia. Historically, the Sami were referred to as Lapps, but today this is deemed a derogatory term.

Today, February 6th, is the National Day of the Sami. Today, the Sami flag should be flown and the Sami national anthem is sung in the local Sami language.  The first time this day was celebrated was in 1993 in Jokkmokk, Sweden.

The Sami are the only indigenous people in Scandinavia that are recognised and protected by international convention. The United Nations estimates that there are over 370 million indigenous people living in over 70 countries worldwide. This is roughly 6% of the global population.

Today, around 10% of the Sami population of approximately 70,000 work within the traditional work of reindeer herding. Most of the rest of the indigenous Sami population is urbanised. Like many indigenous people around the world, the Sami have also been treated very badly by the colonising inhabitants of their country. Scandinavia has a legacy of law and assimilation that denied Sami their rights, and an state-sanctioned history of the removal of generations of children for placement in boarding schools and missions. A recent film called ‘Sameblod’ depicted this shameful era of Swedish history.

It took until 1989 for Sweden to recognise the ‘Sami nation’. Sami pupils are entitled to be taught in their native language, although a loophole enables this right to be sometimes bypassed. In 1998, Sweden apologized for their wrongs against the Sami. To make up for past suppression, the authorities of Norway, Sweden and Finland now make an effort to build up Sami cultural institutions and promote Sami culture and language.

However, it is far from rosy in the arctic north. Conflict over land rights, herding rights, exploitation rights are still raging on across Sapmi. Today, the Sami are experiencing cultural and environmental threats, including unwelcome oil exploration, mining, dam building, climate change, military bombing ranges, and exploitative tourism.

Apart from through activism, it is in the Sami parliaments that the main conflicts are debated.  There are three, unconnected Sami parliaments spanning the region – Sweden founded in 1993, Finland in 1973 and Norway in 1989. Russia has not recognized the Sami as a minority and, therefore there is no official Sami parliament (an unrecognised one exists). These democratic parliaments stand up for Sami heritage but have very weak political influence.

Like many nations around the world, Sweden and their neighbours have to balance the ghost of a shameful past with the conflicts of the present and the hope of the future. Without doubt, discrimination against the Sami people still exists.

This is why today, February 6th, is so important as a day of celebration and recognition but also as a day of atonement.