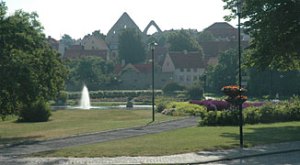 Once a year, there is a summer politics week in Sweden. The week is happening now, and takes place in a park called Almedalen on the Baltic island of Gotland, and attracts heavy media coverage. Every day of the week belongs to a specific party that has a seat in the parliament. This year there are 8 parties.

The Alemdalen politics week started when legendary Swedish Prime Minister Olof Palme spoke publicly. It was at the end of the 60s and there was an audience of a few hundred people.

The Almedalen week has been heavily criticized, and just seeing social media can explain why. The event has become a popular opportunity for companies and organizations to meet and network with each other. In a parallel existence, some people go to Almedalen only for this purpose and not to participate in any political activities. Social media is awash with images of participants mingling, drinking rose wine, partying, dancing and taking drunken groupies.

Live and let live I say. Far be it for me to criticize other people’s choices. I just wonder how far away from the original concept of democracy politics week will go.

And how long before your average Swede sees it as elitist, excluding and irrelevant?