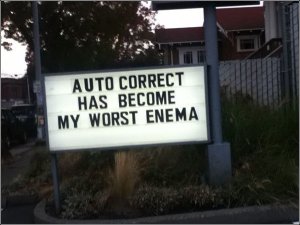 You know the autocorrect function on mobile phones and Facebook? Well, a somewhat depressing realization occured to me today.

After the gym this morning I felt proud and decided to update my Facebook status so everyone would know that I’d been to the gym! I wanted to write that I was freshly-exercised and lovely!

The Swedish autocorrect managed fine to predict what I wanted to write, until I wanted to write ‘nytränad’. (freshly-exercised) It simply didn’t recognise the Swedish word, and gave me all sorts of alternatives. Then I realized the depressing thing – I clearly have never written ‘nytränad’ before!!

One thought on “Swedish autocorrect”