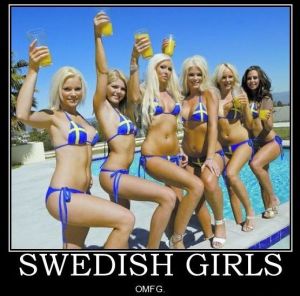 The problem with stereotypes is that they are often out of date and frozen in time. The British stereotype of a polite, thin, uptight man with a bowler hat and brolly still prevails,even though most British men stopped dressing that generations ago.

When I googled ‘Sweden pictures’ today, the picture above came up first. It seems like the stereotype of Swedish women as blonde, promiscuous bimbos is still alive and kicking. This stereotype has rooted itself firmly in the international psyche thanks to fleshy films of the 1960’s.

That was 50 years ago and says a lot about other cultures’ prudish attitudes to sex and nudity.

It saddens me that we haven’t moved on since then.

One thought on “A die hard Swedish stereotype”