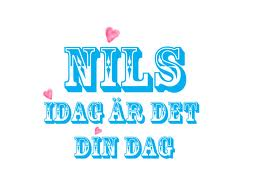 October 8th was my Name’s Day. Well, not quite….but almost. It was Nils. And since I’m called Neil, well, I take Nils as my day.

Some of you might be wondering what the hell I’m talking about. What is a ‘Name’s Day’? Well, it’s like this. In Sweden, every day has a name, sometimes two. And if your name happens to be represented in this way in the calender, then you can celebrate your day. Strange? Maybe. Unusual? Not really.

A Name’s Day is actually a tradition in lots of countries such as Bulgaria, Croatia and Ukraine. According to Wiki, the custom originated with the Christian calendar of saints: believers named after a saint would celebrate that saint’s feast day. In Sweden, however, there is no longer any explicit connection to Christianity. It’s been a tradition since the Middle Ages and started because the church wanted the people to celebrate Name’s Days instead of birthdays which they viewed as a pagan tradition.

There are different lists though some names are celebrated on the same day in many countries. In 1901 a comprehensive modernization was made in Sweden to make the list up to date with current names. This also happened in Finland, but not in other countries.

But Name’s Days are not without their controversy. The monopoly on calenders, held by the Royal Swedish Academy of Sciences, expired in 1972 and so did the official name day list. And then all hell broke loose. Competing lists emerged and finally in 1986 a new list with three names on each day was designed to create harmony in the Name’s Day chaos. But people weren’t happy. Seven years later, this list was revised and reduced to two names per day. But Swedes were still dissatisfied with this and the Swedish Academy produced a new two-name list which was finally accepted and brought into use in 2001. Although it does not have the official status of older lists, it is now universally used in Sweden. One alternative calender, however, is the Diversity Calender which appoints each day with a more diverse selection of names. For example, on that calender, today is the Finnish name Veli.

How this tradition arrived in Sweden is unclear. Maybe it was imported by foreign religious leaders or merchants, or maybe it’s to do with the fact that the Swedish Protestant Church retains some traditions similar to the Catholic. Whatever the origin, it’s a reason to celebrate. And Swedes love to celebrate!

So, come on Hedvig and Hillevi, today’s your day! Happy Name’s Day to you!!

If you’d like to check out if you’re privileged to have a Name’s Day go to www.dagensnamnsdag.nu