One way of understanding the present and future challenges a society is facing is to look at their demographic and an interesting method of presenting this information is in the form of a population pyramid.

According to ‘The World Factbook’ which is information gathered by America’s CIA, the population pyramid, related to age, for Sweden looks as above.

In a socialised society like Sweden, this picture can tell us several things:

Any other conclusions you can draw from this information?

60 million is a massive number. So big that it’s impossible to imagine. Difficult to relate to. 60 million is roughly 6 times the population of the whole of Sweden. And it’s the estimated number of people who are currently on the run in the world today. These people are running from war, from oppression, violence and starvation. They are running to escape persecution, to save their lives, and the lives of their children.

As we sit here in our comfortable homes, drinking coffee and eating our cinnamon buns, we watch these people on our flat screen televisions and switch them off when it gets too repetitive. 60 million people is an impossible number to digest, so it’s better just to put those images somewhere to the back of our minds and complain about the weather instead.

A comparative handful of these 60 million people, against all odds, make it to Sweden. Housed in camps or living homeless on the streets, they break our illusion of our rich society. These people see Sweden as a temporary sanctuary. Here they are safe from war, famine and disease. They are safe from persecution and attack. But some Swedes see them as vermin, as parasites who are here to suck freely at the teet of the tax payer.

We are told in political rhetoric that Sweden is being ‘swarmed’ by refugees, that our comfortable society is at risk. And people are scared that the self righteous baracades that have been built are creaking under the pressure of a world outside.

Get some perspective Sweden!

According to statistics released by the UN, the actual number of refugees and immigrants seeking asylum in Europe last year was round 600 000 – a mere 1%.

Other statistics from Forbes show the following: 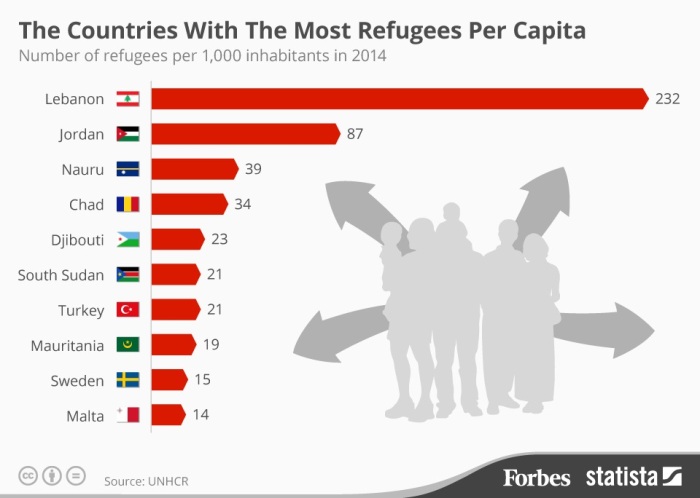 Per thousand people, Sweden took in 15 refugees during 2014 which means around 135000 people. Out of 60 million people who are currently on the move.

We need to have a reality check in Sweden and not believe the political arguments that some parties would have us believe.

In the big picture, the number of people who make it to Sweden is tiny. These people have endured more than we can imagine just to get here. They have suffered mentally and emotionally and probably experienced indignities beyond our comprehension.

The question becomes how do we treat these people who break through our flat screen complacency when they become living examples of what we fear?

I suggest we welcome them with pride and with humanity. And treat them with the dignity they deserve. These are people, not parasites.

And they are desperate to receive our protection.