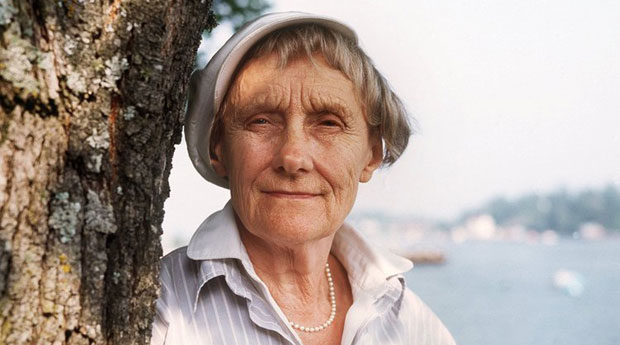 Part 3: writer Astrid Lindgren, creator of the strongest girl in the world.

When I moved to Sweden, I vaguely knew  about writer Astrid Lindgren. It wasn’t until I arrived here that I understood what impact she has had on generations of Swedish children, and not least on generations of girls. The creator of fictional character Pippi Longstocking showed girls that it is ok to be strong, to be independent, to be different and to be the best.

Astrid Lindgren grew up in Näs, Sweden, and many of her books are based on her family and childhood memories and landscapes. Her most famous character Pippi Longstocking was invented for her daughter to amuse her while she was ill in bed. She wrote many classic stories – the most famous being  Emil in Lönnerberga, Karlsson on the Roof, the Six Bullerby Children, Mio my Mio, The Brothers Lionheart and, my personal favourite Ronja the Robber’s Daughter. Her fiction formed the backdrop of the childhood of many Swedish children and, even today for children around the globe. She is the fourth most published childrens’ author in the world and has to date sold around 144 million books in 95 different languages. She received many awards during her life and was known for her support for  children’s and animal rights and her opposition to corporal punishment.

Astrid is a national icon in Sweden and her image currently decorates the 20 kronor note. At her funeral in Stockholm’s Cathedral in 2002, Sweden’s King and Queen and other Royals were in attendance reflecting her importance and contribution to Swedish culture.

Astrid Lindgren gave strength to young Swedish girls and helped them to believe in themselves. In the confident words of the strongest girl in the world, Pippi Longstocking, :

In the hustle and bustle of urban city life there is still room for fairy tales. Out on the museum island of Djurgården, you’ll find a place dedicated to them. A perfect destination for kids and families, Junibacken celebrates the fantastical stories of various Swedish writers, especially the writer Astrid Lindgren. Astrid Lindgren is today still very popular in Sweden and she is the third most translated children’s author after Hans Christian Andersen and the Brothers Grimm. She’s estimated to have sold a staggering 144 million books worldwide and has a whole army of fictional characters to her name.

Here at Junibacken you can meet all of her most well-known characters such as the airborne Karlsson on the roof, the naughty Emil of Lönnerberga, the feisty Ronja the robber’s daughter and the internationally renowned Pippi Longstocking. After traveling the museum train, children arrive at the home of the world’s strongest girl where they can play as wildly as they like.

A visit to Junibacken is a thoroughly Swedish experience, seen through the eyes of children. It is also a testament to a beloved national treasure that ensures her stories will never be forgotten.