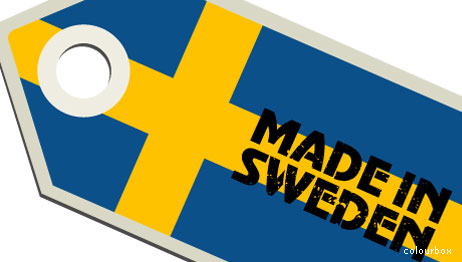 Despite fear-mongering in the media about the awfulness of Sweden, things are actually going rather well for the country. Or at least that’s what a recent piece of research from Forbes would suggest.

The aim of this to identify which countries are the best for business investment and business development. In other words, which is the ‘Best Country in the World for Business’

And in the latest results, Sweden has soared to the number 1 position, beating out other EU countries, USA and low cost countries. So, Sweden is the best country in the world for business. This creates jobs, generates income and attracts new talent to the country.

And if we take a look at some of the successful companies to come out of Sweden, it would seem easy to confirm this. The country is home to some of the most well-known brands in the world, including Electrolux, SKF, Ericsson, IKEA and H&M.

Skype was co-founded by Swede Niklas Zennstrom in 2003. Music site SoundCloud and file sharing site Pirate Bay are Swedish too. Tictail and iZettle are both Swedish. Sweden is also the home to companies that created three of the biggest games of this decade: Candy Crush Saga, Battlefield and Minecraft. The 1 billion dollar financial transaction company Klarna is also founded and based in Sweden. Not bad for a country of only 10 million inhabitants.

So this would suggest that Sweden is entrepreneurial and successful. And the constant development of new ideas attracts new investment which will keep the Swedish economy motoring on strongly into the future.

Here’s the link for the full Forbes listing: https://www.forbes.com/best-countries-for-business/list/ 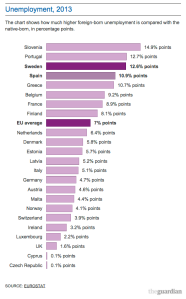 Last night, I was thinking about my working career and realised that I have always had a job. I have never been unemployed more than a few days. When I lived in the UK, I hopped from employment to employment. When I moved to Sweden 20 years ago I got a job teaching English within a week.  Working in Sweden is probably one of the main contributors to my successful integration into society. Through working, I met Swedes, I learned the language and developed an understanding of the culture. I became participative in Swedish life, I paid taxes and I felt a strong sense of involvement and motivation to contribute.

I know I am one of the privileged ones. The latest statistics from Eurostat compares unemployment amongst foreign-born and native-born residents in various European countries. In Sweden during 2013, unemployment was 12.3% higher for foreigners than for natives. This percentage is only higher in Portugal and Slovenia. According to the research, ‘immigrants in Sweden are now more than twice as likely to be unemployed as their native counterparts. In part this is explained by the integration challenge, but in many cases the children of immigrants of certain ethnic backgrounds need to send twice the number of CV’s compared to native-born job applicants before landing a job interview – alongside the challenge, there is also a hint of discrimination.’

This is serious. On the one hand, Sweden is an open and tolerant country. On the other hand, we see the rise of nationalism and the focus on immigration and integration. I strongly believe that what is required are jobs. But not just McJobs. Qualified, relevant jobs. As in my case, through work comes involvement and integration. In Sweden, the foreign-born population is actually more likely to have a higher education compared to the native Swedes. But Sweden has failed to leverage on this. This leads to doctors, lawyers and engineers working as cab drivers and cleaners, something that is corroborated in the OECD International Migration Outlook report which shows that Sweden’s over-qualification rates are among the worst when compared to other advanced economies.

It is no surprise that a failure to integrate foreign born population into Swedish society creates frustration and anger on both sides of the equation. This can be allievated through broad, far-reaching employment initiatives which Sweden has been so good at historically, So be shocked by the statistics and shout this out to the politicians! When we say ‘Welcome to Sweden’, we should mean it.