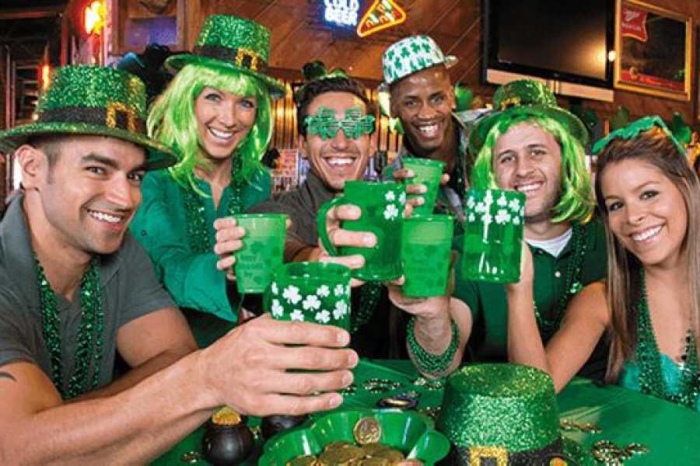 Last night I was at a party (not the picture above). I was clad in green, and wearing a green sign saying Lucky and depicting a pot of gold. Over the speakers, a mix of folk music, U2 and the Cranberries blasted out. Offensive green-coloured beer was served.

Today, 17 March, is St Patrick’s Day. St Patrick, the Patron Saint of Ireland, is being celebrated all over the world. And just like me last night, people are donning green clothes, dancing to fiddely-diddely music and downing beer.

Out of curiosity, I wondered who Sweden’s Patron Saint is. So I researched and I have to say the answer wasn’t totally clear. One Saint in particular kept popping up, but in only one case did I see her referred to as the Patron Saint of Sweden. She is however one of Europe’s 6 Patron Saints.

Do you know who I’m referring to? 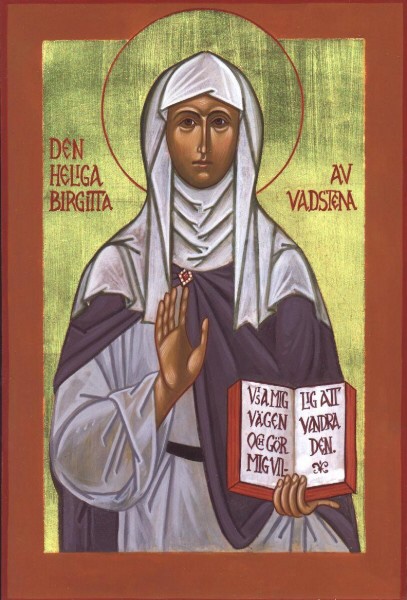 I am referring to Saint Brigit, known in Swedish as Saint Birgitta. She is definitely the most celebrated saint of Sweden. Born 1303 into a wealthy noble family, she entered a Catholic convent after the death of her husband. By this time she was 41 and had 8 children. In 1350, she went to Rome to meet the Pope and there she remained until her death at the age of 70. Her feast day is 23 July, the day she died. Brigit established the Swedish religious community which was to become the Order of the Most Holy Saviour, or the Brigittines at the Swedish town of Vadstena.

Brigit is known for her many influential visions. In her first, at the age of 10, she saw Jesus suspended on a cross. Ages. Her visions of the birth of Jesus came to affect nativity art for centuries to come – the infant Jesus lying on the ground and emitting light himself, the Virgin as blond-haired, a single candle attached to the wall, and the presence of God the Father above. Her visions were recorded in Revelationes coelestes (“Celestial revelations”) and made her a revered and controversial celebrity in the Middle

In Sweden people know vaguely who Birgitta is. I wonder if many know that she is the Patron Saint of the country. She is fairly far from the minds of most Swedes and, unlike the Irish St Patrick, or the Welsh St David, not at all integrated into Swedish identity.

Probably because of her ‘invisibility’, I actually haven’t heard of annual celebrations in Sweden to commemorate Brigit. I’m guessing it’s a low-key affair for the converted. I’m guessing it’s about prayer, meditation and reverence. I’m guessing it’s not about dressing in a unified colour and dancing the jig. And I assume very little beer guzzling is involved.