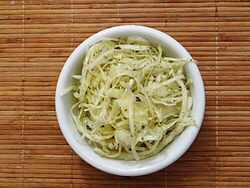 If you want a cultural food experience in Sweden – order a pizza. When you do, you will also experience a very strange bedfellow.

In Sweden, pizza is served with complimentary salad, in both restaurants and take aways. This salad is called creatively –  ‘pizza salad’ and is made of cabbage. It is a kind of coleslaw with white wine vinegar, salt, pepper and oil. It’s fresh, crispy and a bit weird.

This odd combination is as far as I know only offered in the Nordic countries and its origin is a bit unclear.

One theory is that when the first pizzerias opened in Sweden, the traditional tomato salad wasn’t an option due to the climate in the winter. So, subsequently the pizza baker decided to use a more available, local vegetable – the cabbage – inspired by the Croatian salad ‘kupus salata’.

Whatever it’s origin, the pizza salad is so ingrained in the Swedish mentality, it’s become a cultural ‘classic’.  In fact, it’s hard to imagine a pizza without cabbage salad in Sweden.