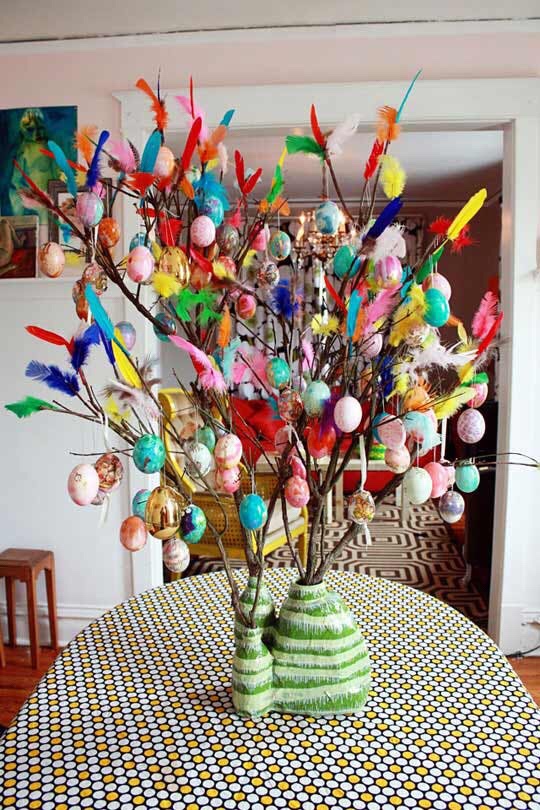 In Sweden, they don’t only have Christmas trees, they also have Easter trees.

This Easter tree, known as ‘påskris’, is a handful of twigs and sticks (usually birch) installed in a vase with coloured feathers attached to the ends. People often hang painted eggs and other decorations such as chickens in their installation.

The Easter tree can be seen all over the country at this time of year: outside shop entrances, in peoples’ living rooms, in gardens, in the middle of roundabouts.

The Easter tree is an interesting cultural phenomena – but where does it originate?

Wiping: Well, some Swedes say that it symbolises the wiping away of the winter. The twigs represent a broom and the feathers get caught in the broom as we sweep.

Witching: Others say that it represents witchcraft. The twigs represent a witch’s broomstick and the feathers indicate flight. This could also be why Swedish kids dress up as witches at Easter and do a kind of ‘trick or treating’ for Easter eggs.

Whipping: But, apparently the Easter tree has a completely different origin and symbolism. Swedish people, in the 1600’s, used to take twigs and sticks and beat each other with them on Good Friday to commemorate the suffering of Jesus. In the 1800’s and 1900’s, they started to be decorated and became a symbolic decoration for Easter.

So, wiping, witching or whipping. Who would have thought the colourful Easter tree would have such a colourful history?