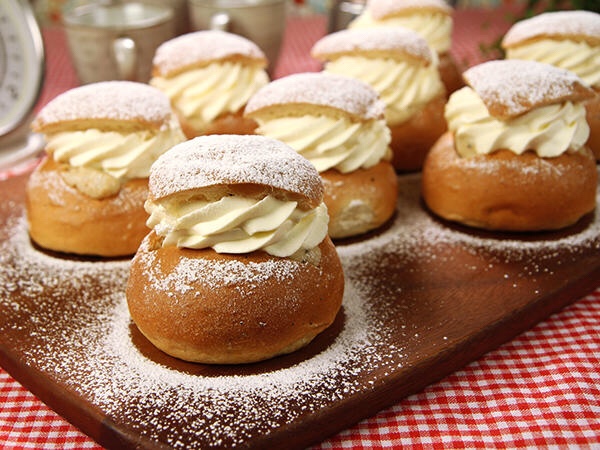 Today it’s ‘Fat Tuesday’ in Sweden, known as Shrove Tuesday or Mardi Gras around the world. While in the UK we eat pancakes and in Latin America they scoff down fried bread, Swedes celebrate by eating the traditional cream Lent bun – the ‘semla’. I’m also clearly going to indulge. In fact, my mouth is watering just writing this blog.

The semla is a creamy bun filled with delicious almond paste. They were eaten traditionally in Sweden to commemorate the start of Lent and the great Fast. In the south of Sweden, they still refer to them as ‘fastlagsbullar’ – Shrovetide buns. Nowadays however, semlas are usually sold anytime between Christmas and Easter.

I just love them. I could eat a barrel load. But I’d end up looking like a barrel if I did. I love the taste of them, and the feeling of luxurious indulgence. I also love the knowledge that as you take a bite into a creamy semla, you are biting into over 500 years’ history of Scandinavian baking.

The word ‘semla’ comes from the Latin ‘simila’ which means fine flour and originally referred just to the bun without any filling. As long ago as the 1500’s, bakers started to hollow out the middle of the bun and fill it with cream and butter. As ingredients became more available, bakers started adding almond and cardemon and the type of semla that we know today developed towards the end of the 1800’s. After rationing of sugar and dairy products ceased at the end of WW2, the semla took off and became very popular.

Nowadays the semla trend has reached new heights. Every year bakers around the country try to launch new types of semla, with their own spin on it -for example, the semla wrap, the semla burger, the semla layer cake, the semla cocktail, the chocolate semla, the vanilla semla, the lactose-free, gluten-free vegan semla.

All delicious I’m sure, but I’m a traditionalist in this matter. Give me a round fluffy cardemon-scented wheat bun brimming over with whipped cream and almond paste.

And give it to me NOOOOWWW!!!