Since March 8th was International Women’s Day, I  am writing a series on Great Swedish Women, past and present: women with strength and passion, women who create change. For seven days, I am writing about these women, one per day. I hope you want to join me in celebrating them. 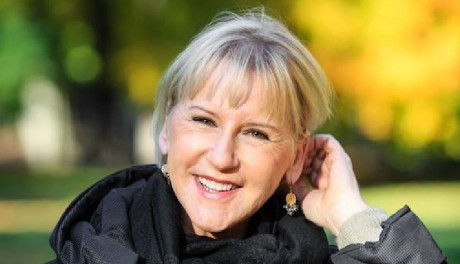 Like all Cabinet Ministers, Margot Wahlström has come under fire for questionable decisions. This aside, I would like to focus on her acheivements as a politician in Sweden, Europe and the world. Margot Wahlström is a woman who works tirelessly for the rights of women and champions Sweden’s ‘feminist foreign policy.’

Born in the north of Sweden, Margot Wahlström has had an impressive career, working both in Swedish and European politics. A Social Democrat politician, one of her significant roles has been at the United Nations where in 31 January 2010, she was nominated the first ever Special Representative on Sexual Violence in Conflict. She was dispatched to the Democratic Republic of Congo to investigate claims that rebel fighters raped more than 150 women and baby boys over four days within miles of a UN base. She later addressed the UN Security Council on the use of sexual violence as a weapon by both rebel and government soldiers. In her speech, she demonstrated that the rapes “were not an isolated incident but part of a broader pattern of widespread systematic rape and pillage.”

In 2014, Margot Wallström was appointed to the Swedish government as Minister of Foreign Affairs. In this role, she has not been afraid to say what she thinks, something which is often not appreciated from a woman. But she does not let this prejudice dissuade her. She was the first EU Foreign Minster to acknowledge the state of Palestine, leading to Israel removing their ambassador in Sweden. On another occasion, she summoned the Russian ambassador to criticize them regarding questionable flights in the Nordic region and threats over Sweden possibly joining NATO. Recently, she commented on Saudia Arabia’s flogging of a human rights blogger calling it a “cruel attempt to silence modern forms of expression”.

Sweden’s feminist foreign policy aims at ensuring women’s rights and participation in central decision-making processes. Gender equality is not just the right thing to do. As research is consistently telling us, it is the necessary and smart thing to do if we want to achieve our wider security and foreign policy objectives. We know for a fact that increasing gender equality has a positive impact on food security, extremism, health, education and various other key global concerns.

Feminist foreign policy is an integral part of the activities of the Swedish Foreign Service. Our methodology can be summarised in four words, all beginning with the letter “R.”

Reality check is about getting the facts right from the outset. If we look to the needs and aspirations of 100 percent of the population, what is the situation on the ground? How should we then prioritize?

Rights. The fact is that human rights are also women’s rights. Here, two fundamental tracks must be followed when pursuing a feminist foreign policy. Firstly, there are areas where we must aim for prohibition, such as gender-based discrimination, domestic violence and forced marriages. Secondly, there are areas where the aim is progress, for example equal rights to inheritance and access to education, employment and health, including sexual and reproductive health and rights. These areas are key to women’s empowerment.

Representation, which includes influence over agenda-setting and starts by asking a simple question: who conducts policy? Whether it regards foreign or domestic policy, whether in Sweden or Tunisia, we see that women are still under-represented in influential positions in all areas of society. I am proud that the Swedish Ministry for Foreign Affairs might be an exception: five top positions – all three ministers and two out of three state secretaries – are held by women.

Resources refers to Sweden’s ambitious international work, for example in development cooperation. The starting-point here is the need to apply a gender perspective when distributing aid and resources. To give an example: today, only one per cent of spending in security sector reform is allocated to initiatives which consider gender equality a significant objective. This is unacceptable. Global gender equality goals must have financial backing.

Sweden’s feminist foreign policy aims to respond to one of the greatest challenges of this century: the continued violations of women’s and girls’ human. Regardless of whether we struggle for gender equality at home – or in a context of conflict like Libya – let’s remember how the Swedish feminist and author Elin Wägner compared values and ideals to old-fashioned bicycle lights: they don’t light up until you pedal forwards.

In our work for global gender equality, we can do a great deal together. I am confident that many of you will join in pedalling forward.

Margot Wahlström’s feminist perspective is notable, and not always popular, on the international political agenda. She continues to fight for what she believes in and to strengthen women’s rights and empowerment around the world.