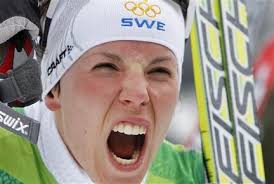 Many Swedes are great sport-lovers. And surprisingly for a country with a small population, they’re relatively successful. Right now, winter sports are in focus as Sweden hosts the World Championship in Cross-Country Skiing.

It’s hard to believe when you’re sitting in sunny, un-icy Stockholm that there is any snow elsewhere in the country. But there is and today, Sweden won gold! Popular skier Charlotte Kalla demolished the competition and won a gruelling 10km race in pouring snow. She won with a 41 second margin, which is significant in this sport and she slammed the Norwegians who normally rule the roost in cross-country ski sports.

A glimpse at the current media gives an indication of how important this is to Swedes and what an acheivement it is:

‘Gold! She crushed the opposition!’

‘Kalla crushed the competition at her favourite distance race’

With all this crushing, it’s easy to see that this is huge in Sweden – a victory on home turf – and in that moment Charlotte Kalla just became the nation’s powerhouse sweetheart.