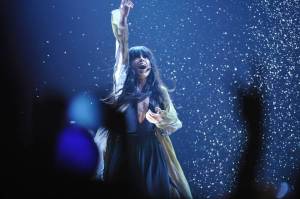 Last night, Sweden selected its representative for the Eurovision Song Contest. It’s an understatement to say that the process to find the winner is popular in Sweden. After 5 heats, the finalists are selected, and a winner is voted in – partly by 10 international juries and partly by the Swedish public.

Usually after the competition, discussion and debate begins – did the right song win? No! The wrong song won! It’s like a national chant for a few days after the final.

But this year seems different – everyone seems to be in agreement that the right song actually won. The whole nation seems convinced. Is that what makes a success at Eurovision?

But Loreen is no ordinary representative. Already, she has made a political comment about the democratic rights and rights of women in Azerbaijan. In a media circus such as the Eurovision Song Contest, this is a refreshing element. Anyone who claims that politics has no place in the event is misguided – it always has been and always will be highly political.

So let’s happily send Loreen – not only because she’s a great artist with a great song, but also because she’s a modern, politically-aware self-declared feminist who wants to make a difference.

2 thoughts on “Swedes in Euphoria”