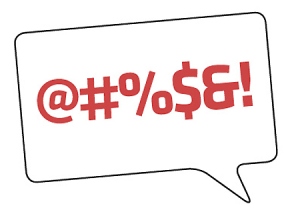 Any foreigner arriving in Stockholm yesterday would have been surprised to see the tons of snow that were dumped on the city from the heavy sky. Even though they couldn’t speak Swedish, they would have picked up on one expression – a word that was heard on everybody’s lips. A word that had to be the most commmon word of the day yesterday.

The meaning? Something like fuck/shit/damn and used in this case in disappointment and dismay as the snow lashed down.

Swearing in Swedish is usually something I try to avoid. I think it’s difficult to swear in a foreign language because you don’t really understand the nuances and strength of the word in question. It’s easy to cause offence.

A recent article in a newspaper took up this issue of swearing in different cultures. All cultures have swear words and most of them are connected to what is considered taboo in that culture. Common themes are religion, genitals, toilet, sex and mothers.

In the Nordic countries, ‘mother’ isn’t such a loaded theme and therefore doesn’t feature in the common swear words. The strongest swear words are those connected to genitals, usually the female.

If you know more Swedish words than ‘fan’ and you’re interested in reading more, here’s the link: