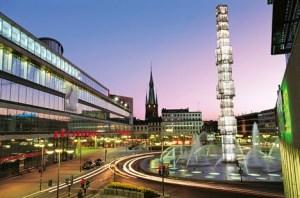 When students graduate from Sixth Form College in Sweden, they go on a procession around the city. Part of the route takes them through Sergels Torg, a heavily-trafficked square in the centre of Stockholm. Politicians decided at the weekend that the students would not be allowed to go through this area this year.

And there was a public outcry. The students started a Facebook group and demonstrated against the decision. And today, the decision was rescinded. The students can go through Sergels Torg as they have always done.

On the tv, they interviewed the 19-year old student who had started the protest. They asked him how he felt. He answered

‘I think this shows that politicians listen. And that we really can influence them and make a difference.’

What a fantastic lesson for a 19-year old boy to learn on the day of his graduation.