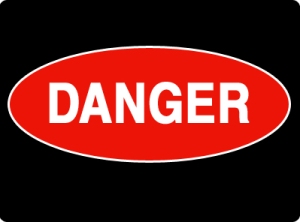 Wandering from the beaten path in the Bronx, down back alleys amongst trash cans and restaurant containers is known to be dangerous. It’s just not something you’d do.

Entering the council estate off Coldharbour Lane in Brixton in London, past the brick buildings with narrow walkways and tiny windows is also known to be dangerous. You just wouldn’t do it.

And in Johannesburg, you wouldn’t venture out into the shanty towns at night, away from the bright lighted protection of the tourist area. Sad, but true. Unless you had a death wish, you just wouldn’t do it.

But Stockholm is comparatively safe. Most of us feel secure travelling on public transport, making eye contact with a stranger on the street and walking home late and night.

Stockholm is a dangerous city! A city where you walk on the wild side. Where you take your life in your hands every time you walk out of the house. A town where you live on the knife edge.

In today’s newspaper, the cover story was about a woman recuperating in a local hospital. She’d been walking down the street, minding her own business when a block of ice plummeted from a snowy rooftop and smacked her in the head. She survived with stitches but it could’ve been much worse. A few years ago, a teenage boy was killed by a lump of ice that slid off a rooptop and crushed his skull as he walked along the road.

So, I scoff at the Bronx, at Brixton and at Johannesburg. It’s us in Stockholm who look death in the eye every time we leave the building.